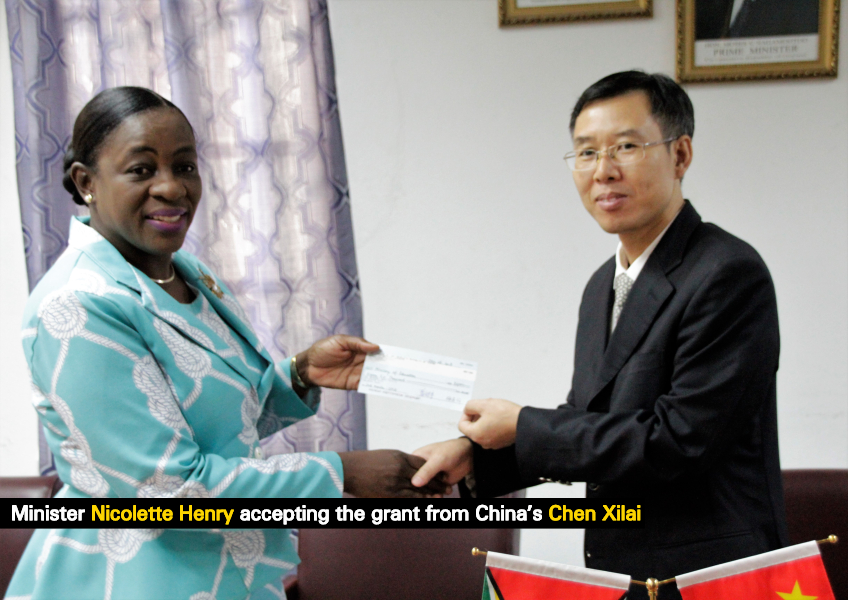 The Ministry of Education was yesterday (December 3) the recipient of the sum of US$86,000 ($G17.2M), compliments of the People’s Republic of China. The sum, which was handed over to Minister of Education, Nicolette Henry, represents part of a US$231,000 (G46.2M) grant gifted to President David Granger to facilitate some form of developmental work.

In accepting the grant, President Granger requested that it be utilized by the Cyril Potter College of Education (CPCE) to improve its science programmes and facilities at that institution.

It is expected that the grant will be disbursed in three tranches. The first tranche of funding to the tune of US$95,000 (G$19M) was already disbursed to the Education Ministry earlier this year.

The handing over ceremony for the disbursement of the second tranche was held in the Ministry’s 26 Brickdam, Georgetown boardroom and was attended by officials of both the Chinese Embassy and the Ministry.
At that ceremony, Minister Henry in her remarks expressed appreciation on behalf of government and President Granger. Additionally, Henry said that such a posture by the People’s Republic of China demonstrates the strong partnership and bilateral relations that exist between the two countries.

Added to that, the Education Minister believes that the grant will assist in the development of the nation’s citizens and the advancement of the education sector.

The Education Minister noted too that an investment in the education sector is preparing for the future, with education being the bedrock of any country’s development.

In proffering remarks, Charge d’ Affairs, Counsellor of the People’s Republic of China, Mr. Chen Xilai, said that he is satisfied with the implementation of the project. The official also said that he was elated to see that CPCE is already acquiring the necessary science equipment and supplies to assist with the science programme at that institution.

The items that are being procured include: human body cubes, models of a functional heart, triple beam balances, thermometers, water distilling equipment, orbital system, electrolysis, Bunsen burners, and chemicals. These are expected to be delivered in the last week of this year with the cost for that purchase to be offset by the first tranche of funding.

The two parties have already started discussions for the finalizing a date next year for the disbursement of the final tranche of US$50,800.