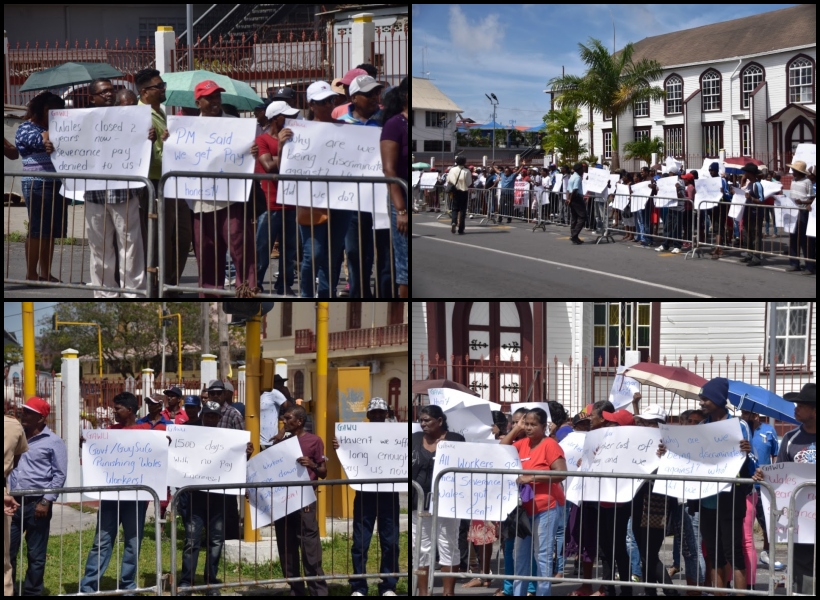 Earlier today, a group of sugar workers from across the country picketed in front of Parliament building calling for an increase in salary. They claimed that their appeal is not an unreasonable one since they have not received an increase since the coalition government took office.

The protest action took place as members from both the ruling party and the opposition, the People’s Progressive Party (PPP), were in the National Assembly debating the 2019 National Budget.

In a statement to the media, the Guyana Agriculture and General Workers Union (GAWU) highlighted that the sugar workers remain the only group under the umbrella of the State to have not benefitted from a pay rise since the Coalition Government took office.

GAWU said that approximately 350 workers remain the only group of workers among the thousands who have been made jobless two years ago to have not received their severance payments arising from estate closures.

“The Government and the Guyana Sugar Corporation (GuySuCo) have already settled their indebtedness to other workers who have suffered similar fates…However, the continued withholding of these workers’ payments is beyond perplexing and raises serious questions about what factors are influencing the non-payment to the workers,” the Union commented.

Further to this, the Union reminded that Prime Minister, Moses Nagamootoo had claimed that the workers from the Wales Estate have been paid. But GAWU said this is not true.

On that note, the Union and the disgruntled workers are urging the government to honour their obligations.