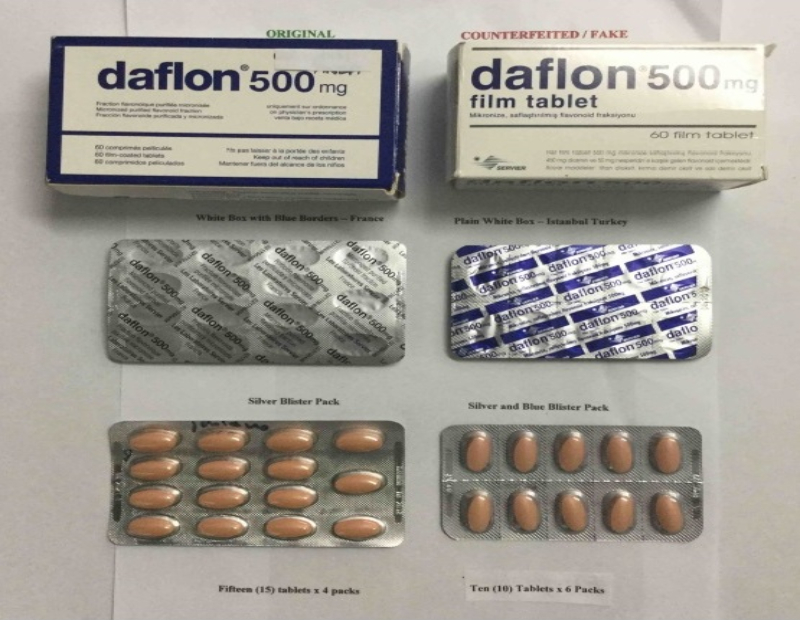 An alert has been issued by the Government Analyst –Food and Drug Department (GA-FDD) for fake Daflon brand tablets currently being circulated on the local market.

In a statement issued this afternoon, the Food and Drug Department said that consumers must beware of the counterfeited 500 mg micronised purified flavonoid fraction tablet.

The manufacturer’s address of the original product is in France while the fake product has a manufacturer address in Turkey or Ukraine.

Inspectors of the GA-FDD have to date seized approximately 24 boxes x 60 tablets x 500mg of the counterfeited product from several wholesaler bonds and retail pharmacies in Georgetown and in Region Three.

According to the Food and Drug Department, criminal proceedings are expected to shortly be instituted against the importers of the fake Daflon.

Fake Daflon are unable to achieve therapeutic effect for its intended use because flavonoid are poorly micronized, resulting in particle size greater than 2 micro meters resulting in poor stomach absorption.

Consumers are therefore asked to return the counterfeit product to wholesalers and retailers and be refunded. Additionally, consumers have been asked to report to the Food and Drug Department if they are confronted with any proprietor who refuses to cooperate with this mandatory recall exercise.

Further, the GA-FDD is calling on importers and distributors to, with immediate effect, surrender all fake Daflon associated with this mandatory recall to be destroyed. Failure to adhere to this mandate will leave the department with no alternative but to initiate legal proceedings against defaulters, GA-FDD said in a statement.

Meanwhile, the Department said that it will continue to robustly monitor the local market for fake, substandard and counterfeited products in the interest of consumer protection and safety.