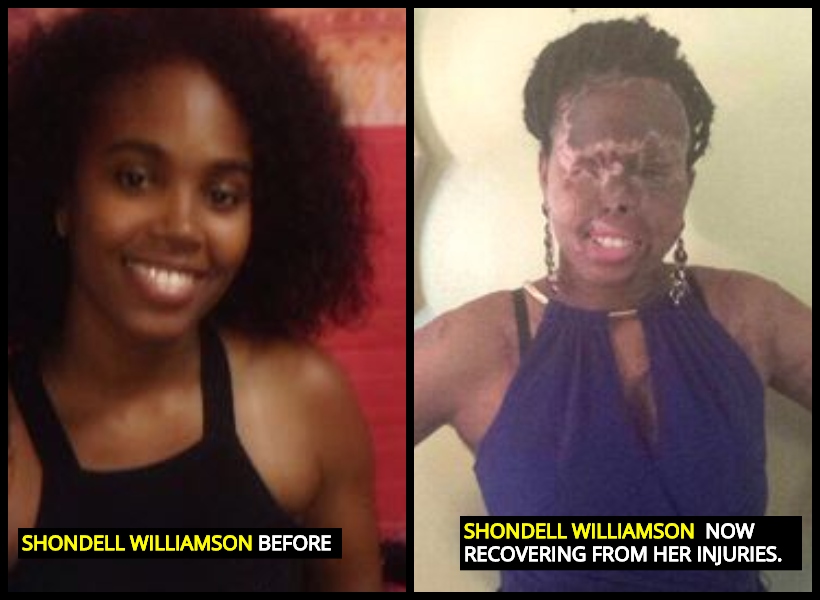 Having undergone 11 surgical procedures with several others lined up, acid attack survivor, Shondell Williamson, hopes to empower other victims to break free from relationships characterized by domestic violence.

The 28-year-old woman was doused with a corrosive substance allegedly by the father of her two children in January 2017. Her face was most affected. She had even lost her vision as a result of the attack.

With the help of Saving Hands Emergency Aid (SHEA), a non-profit organization in the United States of America, Williamson underwent 11 surgeries in the foreign country with most of them focused on her sight.

Though not clear, the young mother is able to see her sons—something she is grateful for. She can identify colours and tell when there is light or darkness.

Williamson said her surgeries were painful but she focused on the outcome. She said before her surgeries, her sons were afraid of her but now they sleep in the same bed as her and try their best to protect and comfort her.

Having been through one of the most painful and traumatizing situations in her lifetime, the young mother plans to use her experience to empower other women of domestic violence so no one else can suffer the way she did. She hopes that by sharing her experience and knowledge on domestic violence, victims will be able to move on as early as possible and not suffer any harm.

It was January 19, 2017, in New Amsterdam that Shondell’s ex-partner disguised himself as a female and doused her with the substance that disfigured her entire face and upper body.

The man responsible for her condition, Alfred De-Jonge, had journeyed from Linden to Berbice after Shondell had finally summoned the courage to end their 10-year abusive relationship and doused her while shouting out, “If I can’t have you, no one will.”

He then escaped in a waiting car. He is now facing an attempted murder charge and remains behind bars, awaiting trial.