Home News Govt. was not wholly honest with nation about my meeting with the... 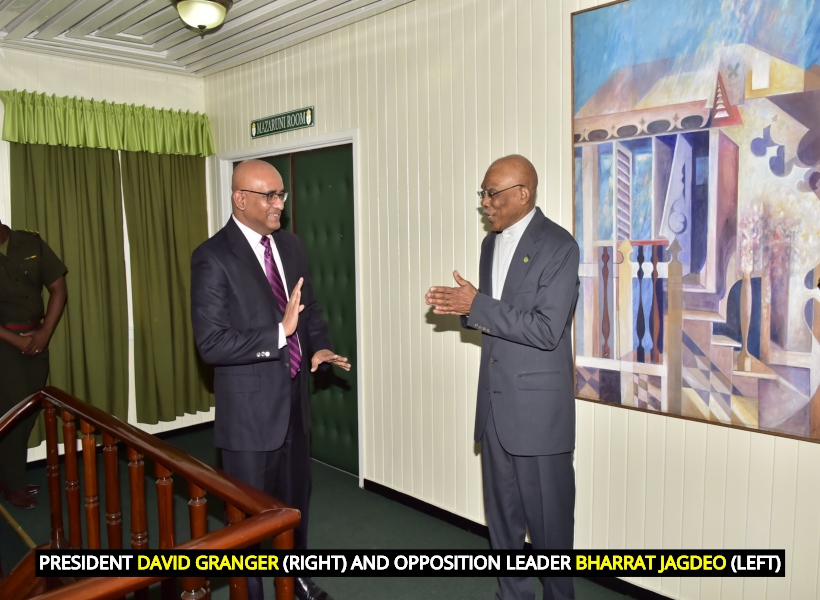 Leader of the Opposition, Bharrat Jagdeo is calling out the APNU+AFC Government on recent expressions made in a joint statement following his meeting with President David Granger.

Jagdeo claims that what the government put out as a joint statement is “misleading” and represents a “total spin” on the truth.

Jagdeo, during a press conference at his Church Street office today, accused the government of putting words into his mouth after his January 9, 2019 meeting with President Granger.

Jagdeo recalled that minutes after the meeting, President Granger told the nation that both sides agreed that public services had to be delivered, public order must be maintained, and that the two sides ultimately reached broad agreements on how multiple branches will function. Further, the statement indicated that Jagdeo believed that there should be a government in place.

Jagdeo told the media that the statements were not wholly true. He maintained that the Opposition is still calling on the resignation of the Government and is maintaining the legality of the No Confidence Motion.

“The president misled the entire country that we had struck an agreement on how these two branches should function,” Jagdeo said. He continued, “These views have been repeated so now I see everyone is quoting that meeting to say that it was a great meeting and somehow created the impression that we agreed that elections in 90 days would be conditional upon GECOM’s readiness and the court case,” he said. “This call has not been dropped. In fact, I reiterated…and spoke of compliance of 106(6) which is resignation.”

Further, the Opposition Leader opined that the Government’s behaviour is hypocritical. He noted that during its time as the parliamentary opposition, the now government fervently pushed for the resignation of the then PPP Government following the tabling of the 2014 no confidence motion when the then President Donald Ramotar prorogued the parliament.

Jagdeo recalled that in 2014, APNU and AFC  made every effort to impede the progress of the country by pushing protests and visiting ministers’ offices.

“I asked him [President Granger] how he had that view then and is now saying that. The constitution has not changed,” Jagdeo stressed, before adding, “He declined to answer that. But the timeline imposed upon by the two articles of the constitution…must be rigidly observed…pending the outcome of the legal proceedings.”

Also, Jagdeo said that the government is using the courts to delay the constitutionally mandated election.

“Guyanese recognise That much of the sting that was done by the government in the period before the joint press statement came out, that that was just spin and a falsehood represented at various levels of the government.”