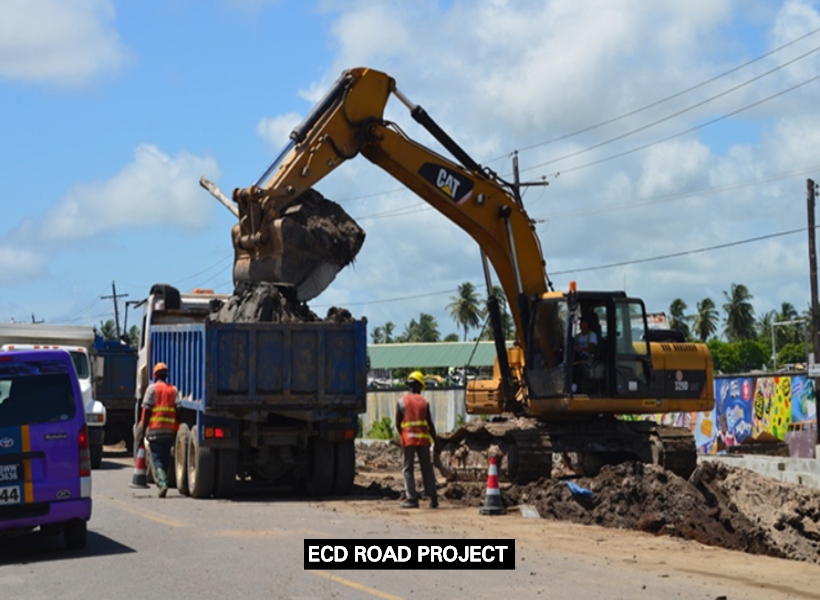 The East Coast Demerara Road Widening and Improvement project is just over halfway completed, with officials from the Ministry of Public Infrastructure revealing that approximately 55 percent of the project is wrapped up.

During a Facebook live video held this afternoon on the Ministry’s page, Minister of Public Infrastructure, David Patterson and Project Engineer Nigel Erskine, shared that the project is progressing smoothly with a number of key areas completed. Amongst the completed works are 10 culverts; five bridges that were expanded to accommodate a 4-lane road; 14.2km of reinforced concrete drains; sidewalks; and the construction of 16.1km of media for the 4-lane section.

“In terms of road works, we have completed more than 81% of the sub-base,” Erskine added.

Furthermore, the engineer said that within the 4-lane section the construction of a concrete median has begun. The purposes of the median are to prevent head-on traffic collisions and to allow for the installation of streetlights and traffic lights. Within the 4-lane section, there will be 11 openings, nine of which will be managed by traffic lights to ensure that drivers and pedestrians can maneuver safely. Locations include La Bonne Intention, Triumph, Mon Repos, Good Hope, Annandale, and Lusignan.

“The medians would have been designed…during the design process and the consultant would have had consultations with stakeholders and would have looked at the engineering parameters to have them at those specific locations,” Erskine explained.

The engineer further assured commuters that the traffic management and environmental plans will stay in effect for the duration of the project and urged residents to lodge all complaints with the established project hotline. He added that he foresees traffic congestion issues will be reduced as paving progresses within the coming weeks.

Minister Patterson apologised for any inconveniences caused but noted that the project is one for progress of Guyana.

Meanwhile, February 1 will see the relocation of vendors to allow for works within the Lusignan stretch. For the Mon Repos market, the Ministry has agreed to construct a permanent tarmac at School Street to accommodate vendors. Currently, works are ongoing on the side drains but, upon completion, preparatory works will commence on the tarmac. In the interim, the vendors from the Mon Repos market tarmac will be related to the southeast of School Street to allow works to progress, Erskine said. The permanent market will be finished by the end of March but the vendors will be temporarily relocated within the coming week.

The project’s contract was signed in December 2014 but works only commenced in 2017. Its expected completion is September 6, 2019.