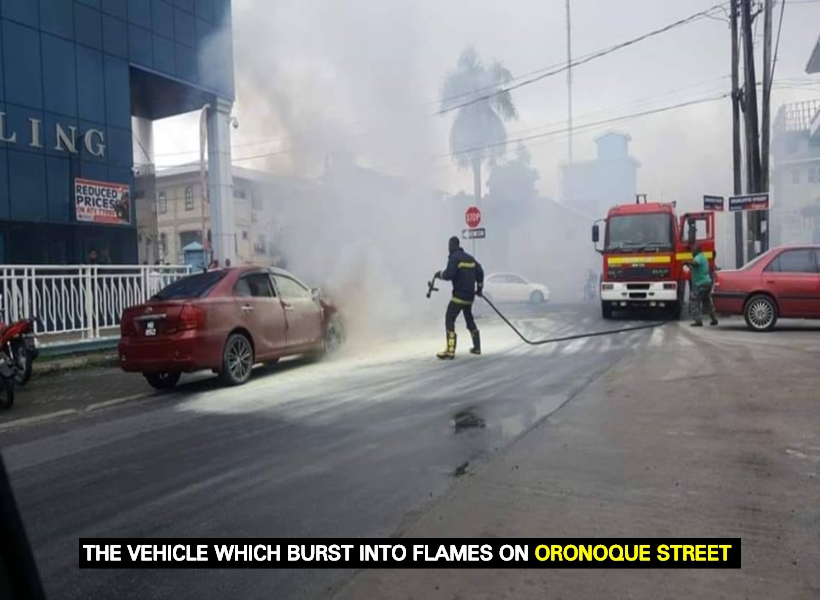 This morning, firefighters were called to Oronoque Street, Georgetown after a vehicle burst into flames.

According to information received, the driver noticed smoke emanating from the bonnet and when he checked, there was fire. Only the front of the vehicle was destroyed this time since firefighters managed to arrive early.

This is the fourth vehicle that caught fire in recent times. On February 7, last, a route 32 mini bus was heading to Vreed-en-Hoop when it reportedly crashed into a utility pole before bursting into flames. Four persons sustained minor burns.

On February 6, last, two vehicles—a Guyana Power and Light Company (GPL) minibus and a car went up in flames. Luckily, no one was injured.

In the first case, a car bearing registration number, PJJ 5656 exploded at High Street and Brickdam. The driver said he first noticed smoke emanating from the car’s bonnet and quickly exited the vehicle. It then exploded before he was able to put out the smoke.

About an hour later, a mini bus contracted to the Guyana Power and Light Company burst into flames at Sheriff Street, Georgetown. Reports are that the vehicle was heading to the Rupert Craig Highway when the driver noticed thick smoke emanating from under his seat. The occupants in the vehicle barely managed to exit the bus on time.

The Guyana Standard has been informed the drivers for all four vehicles have indicated that they would have purchased gasoline from one particular gas company. For the past couple of months, drivers have been complaining about stench of the gas from that particular company.

The Government and the Guyana Oil Company announced this earlier month that there will be a significant reduction in prices for Motor Gasoline and Gasoil (LSD) starting from February 4, 2019.

THE VEHICLE THAT BURST INTO FLAMES ON ORONOQUE STREET