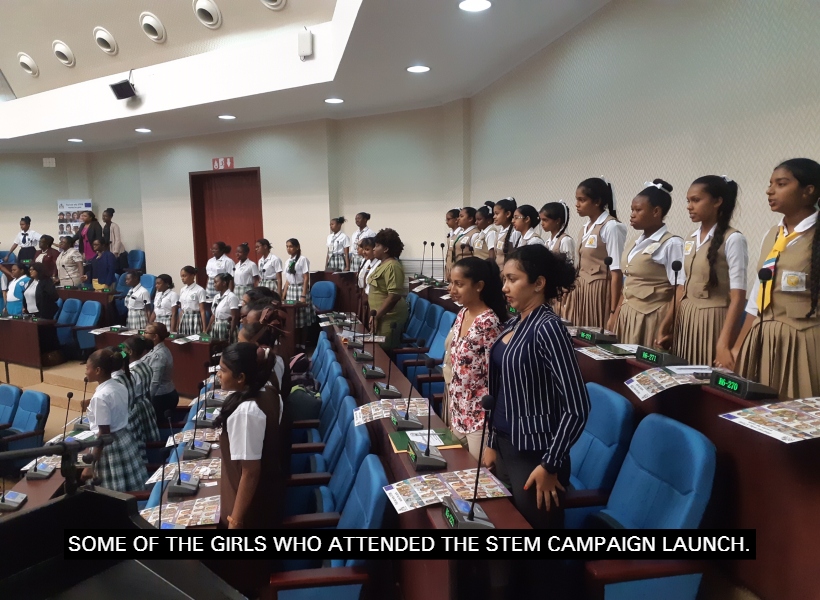 To mark international Science, Technology, Engineering and Maths (STEM) day, the Ministry of Public Infrastructure and European Union Delegation to Guyana, with support from the Ministry of Education, launched the third and final campaign to promote STEM for girls in Guyana, at the Arthur Chung Conference Centre yesterday. The event was attended by 200 persons who included representatives of some 15 Secondary schools from Regions Three, Four, Five and 10.

“This is the 21st Century, and we realize that most of the jobs that are available are going to be jobs that incorporate STEM. So, the entire #GyGirlPowercampaign is to encourage our girls to re-think, and hopefully, choose careers in STEM. For this it is important that they take the science and technical streams in school,” explained Marissa Massiah, Human Resource Manager of the Ministry of Public Infrastructure.

Professor Ivelaw Lloyd Griffith, C.C. H. Vice Chancellor and Principal of the University of Guyana, phenomenally celebrate young girl’s self-worth and the importance of their ability to make themselves great. Professor Griffith alluded to the significance of one child, one teacher, one book and one pen. He explained to the young girls gathered at the conference that essentially it is just one who needs to excel and make a difference in their sphere.
Dr. Dawn Fox then shared a mind-blowing presentation on her personal journey in becoming a scientist. Dr. Fox explained to the young girls that science is a fascinating subject that allows people to appreciate life and surrounding more.

This campaign will see the release of 10 new promotional videos.  For three consecutive years, the campaign has interviewed/interacted with women to learn more about their experiences working in a wide range of STEM related fields. A number of the videos capture interviews with well-respected figures who strongly support the sentiment that in order to get good jobs, creative jobs, and good salaries, girls need to apply themselves more seriously to STEM subjects. This is of importance also for the economy of Guyana.  As Petal Punalall-Jetoo, National Science Coordinator and Head of Science Unit, puts it, “in Guyana, we’re short of STEM skills for both males and females.

Sometimes we have to import skills. There are lots of opportunities in research, industry and manufacturing, food production, education.”

The project ‘Women in Engineering and Technology Awareness campaign’ which included the three year #GyGirlPower campaign was funded by the European Union as part of the gender approach in the Integrated Coastal Zone Management project (ICZM). The ICZM is ongoing since 2017 and will continue up to 2021 with a budget of EUR 30 Million funded by the European Union. The promotion of gender equality is an important principle for the EU, as a basic human right, but also for the benefit of the family, the community, even the national economy.

“The European Union seeks to promote equality and to eliminate discrimination on the grounds of sex, race, colour, ethnic or social origin, language, religion or belief, minority state, age and sexual orientation by legislative and non-legislative measures. In its development cooperation, the European Union’s goal is to implement the gender dimension in all different policy fields, from employment to health, from research to education, just to name a few.
The 2019 campaign videos will be released over the coming weeks.  The videos from the previous campaigns can also be found on Facebook or Youtube by typing in the hashtag #GyGirlPower or #STEMworks.