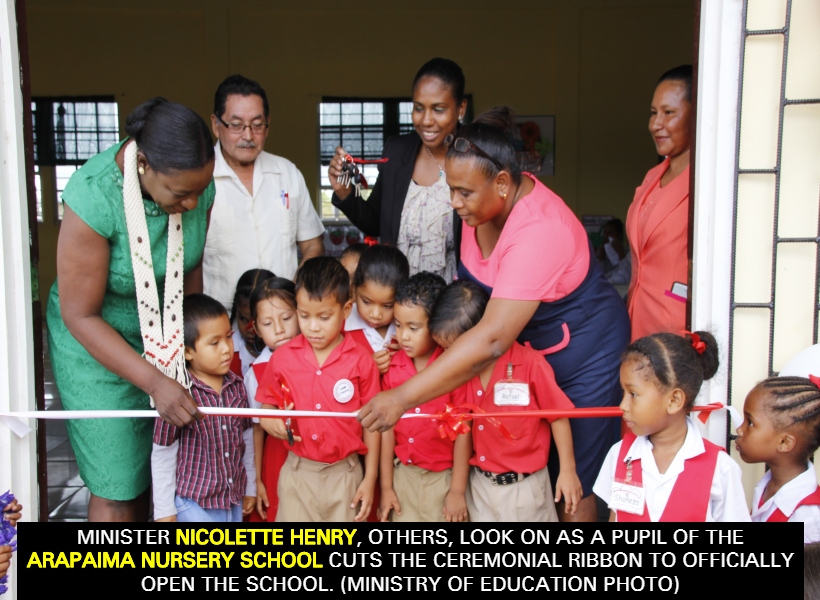 The hinterland community of Lethem in Region Nine is now on much firmer educational footing as Minister of Education, Ms. Nicolette Henry, commissioned two nursery schools, Parikwarunau and Arapaima and the town’s first smart classroom at the Learning Resource Center on Friday last.

The Education Minister was part of a ministerial team that conducted outreaches in a number of villages within the community.

At the first commissioning at Parikwarunau Nursery in a remote area, fourteen miles from Lethem, Dr Henry told the villagers that her government is committed to ensuring that they have access to quality education.

Further, Minister Henry quipped that it does not matter where persons are located and that the commissioning of the $13M facility is testimony that the current administration is serious about bridging the gap that exist between the hinterland and the coastland communities with regards to education.

Regional Chairman for region nine Mr. Brian Allicock in his remarks reminded parents of the virtues of Parents in the education process.

The Regional Chairman posited that a population without education will go nowhere. Mr. Allicock believes that with the construction of the new edifice, the Wapishanas and Macushi community is now poised for success stories in the education sphere.

The second school commissioned was the Arapamia Nursery and this was necessitated with an increase in the number of nursery-age children in the community. The $14.3M facility is equipped with a sick bay, washroom, store room and a Teachers room.

Henry said that this development demonstrates the government’s committment in ensuring that the country’s young population is on par with what students in the region and globally are exposed to.

For one, the Education Minister believes that the smart classroom will allow for much networking which will enhance learning in the region. It was noted that the facility is there to serve the community even as both teachers and children will be allowed to utilize it.

Minister Henry said that it is her plan as the Minister of Education to have smart classrooms in every region.

This posture according to Henry will ensure that children are always taught even if a teacher is absent; since a teacher in Lethem for example can teach a class in Georgetown using the smart classroom.