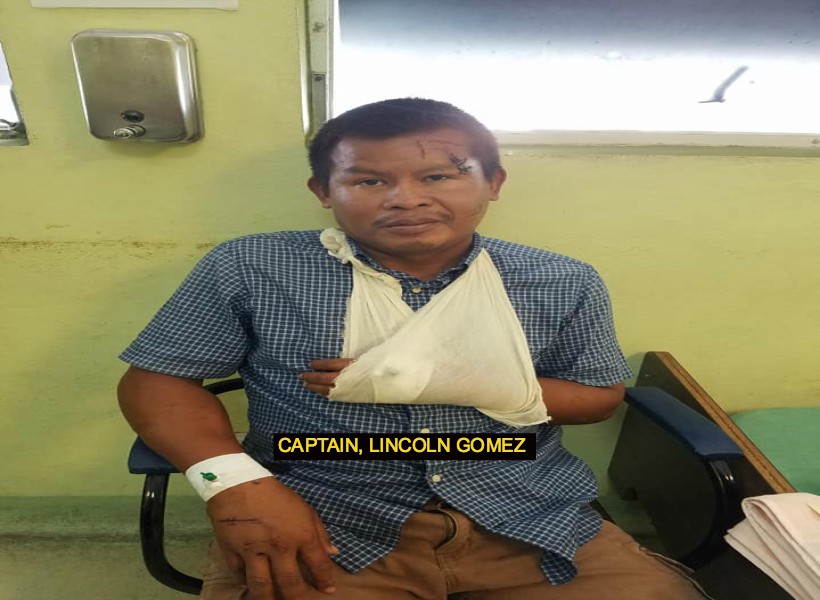 “Mayday mayday mayday, N8704T is declaring an emergency!” this was the call Captain Lincoln Gomez made to the Control Tower at the Eugene Correia International Airport on Sunday—the day his plane went down aback Canal Number Two, West Bank Demerara.

Gomez and policeman, Mark Grimond, were transporting a body from Arau in the North West District to Georgetown when they ran out of fuel and crashed. Grimond sustained a broken jaw while the pilot suffered cuts to his head, face and a fractured scapula.

Recalling what happened on the morning of the crash, Gomez said that plans were in place for him to fly to Paramakatoi, Region Eight from Ogle to take building materials for a church in Monkey Mountain, Region Eight.

While heading to the airport, Gomez said he received a call from a colleague that he should also fly to Arau to pick up a patient who was in an accident.

“I made up my mind to fuel the airplane and fly to Arau instead of Paramakatoi. A few minutes later we received the sad news that it was our fellow missionary from the US who was involved in the accident and he had died. I just could not believe the news. It was so shocking,” the pilot recalled.

Gomez said he decided to continue to Paramakatoi after fueling and loading the plane. “I landed there in afternoon and spent some time there. Eighteen minutes after taking off from there, I heard news from the control tower that GAMAS (Guyana Adventist Ministries and Services) said I should fly to Kaikan, pick up a policeman and continue to Arau to pick up the corpse and fly it to Georgetown. So I diverted my flight to Kaikan.”

Gomez further explained that while flying, he received another announcement that he should pick up someone from Paruima, Region Seven and fly her to Kaikan. He then departed for Arau and collected the body.

Initially, they were supposed to fly to Paruima and spend the night there since it was late but upon realizing the body had started to decompose, the pilot said he decided to fly straight to Georgetown.

“I had already measured the fuel in the plane and had enough to fly to town according to the fuel burn measuring instrument and calculations. So we took off for Georgetown. After sometime I was asked by control tower if I can fly IFR (instrument flight rules) and I agreed not knowing the implications,” Gomez said.

He added, “At some point I was asked to descend to 2,000 from 7,000ft MSL. So I descended. I looked at the fuel indicator from time to time as usual and it was getting lower but I trusted that I had enough knowing how much the indicator usually indicates fuel burn.”

The Guyana Standard was told that the plane had already crossed over the Essequibo river when the engine began to idle.

“Ahead and all around was dense jungle and it was about 97% darkness in spite of the moonlight. I did my usual round of trying to troubleshoot an engine failure. However, nothing worked and I started to declare an emergency,” the pilot recalled.

Gomez said while he was busy reporting their position, the aircraft touched the trees and he lost consciousness.

“There is no doubt that God led the plane to a certain spot which did not have very big trees. Otherwise we would have been dead. Somehow the plane had turned upside down. All I could have done was to maintain glide-speed until touchdown.”

The pilot said he only remembered being outside the plane with the policeman afterwards. “Evidently he had pulled me out along with the other things from the airplane including the corpse from Arau,” the pilot said.

The pilot thanked the Guyana Defence Force team for rescuing him and the pilot.