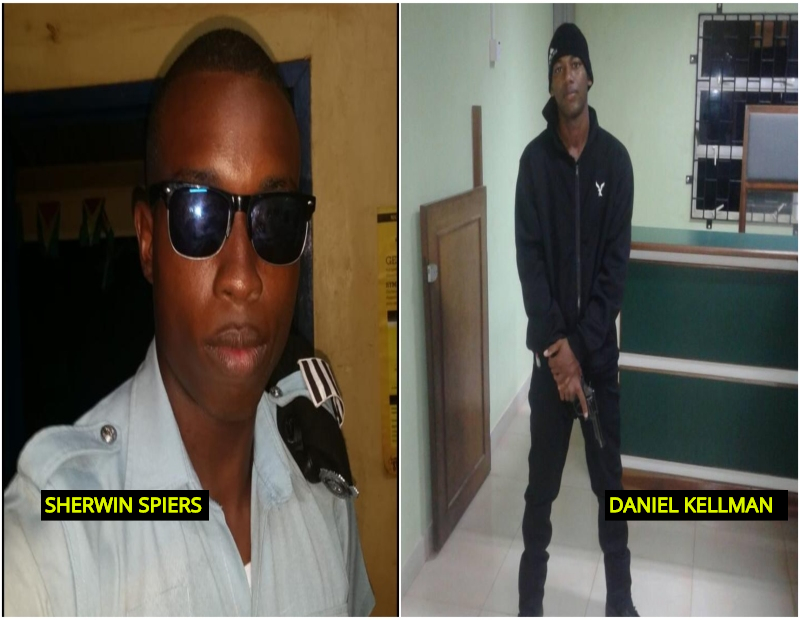 Two members of the Guyana Police Force (GPF) were today (February 26) released on $100,000 bail each after being accused of robbing a man while using police issued firearms.

Daniel Kellman, 25, of Linden and Sherwin Spiers, 21 of Parika, East Bank Essequibo, are accused of using GPF issued firearms to rob a man while they were performing duties at the Takatu International Bridge.

The charge against the duo stated that on February 20, 2019 at Takatu International Bridge, while being armed with guns issued by the Guyana Police Force (GPF), they robbed Ronaldo Ferreira of a phone valued $38,000 and $1,200 cash.

They both denied the allegation after it was read to them by Chief Magistrate Ann McLennan in the Georgetown Magistrates’ Courts.

Both men were represented by attorney-at-law, Jerome Khan, who asked that his clients be released on their own recognizance (self bail).
The lawyer in a successful bail application told the court that, on the night in question, his clients were assigned to perform duties at the Lethem Bridge and were issued rifles. The lawyer added that around 19:00 hrs his clients saw the defendant on the bridge and they stopped him and carried out a search on him.

The lawyer argued that due to the victim not speaking English, there were some communication issues and his clients took the victim’s phone, cash and a quantity of narcotics into their possession to lodge same at the station.

The lawyer added that the victim arrived at the station before his clients and told officers that he was robbed of the articles mentioned in the charge.

However, the court prosecutor objected to bail being granted to the defendants on the grounds that they used the force’s firearms to commit the offence while they were on duty.

He added that when the ranks returned to the Lethem Station where they are stationed, a search was conducted, and the stolen articles were found in their possession. Hence, they were arrested and charged for the offence.

The Magistrate, after listening to both sides, released the men on $100,000 bail each.

They are expected to make their next court appearance on March 5, 2019 at the Lethem Magistrates’ Courts.