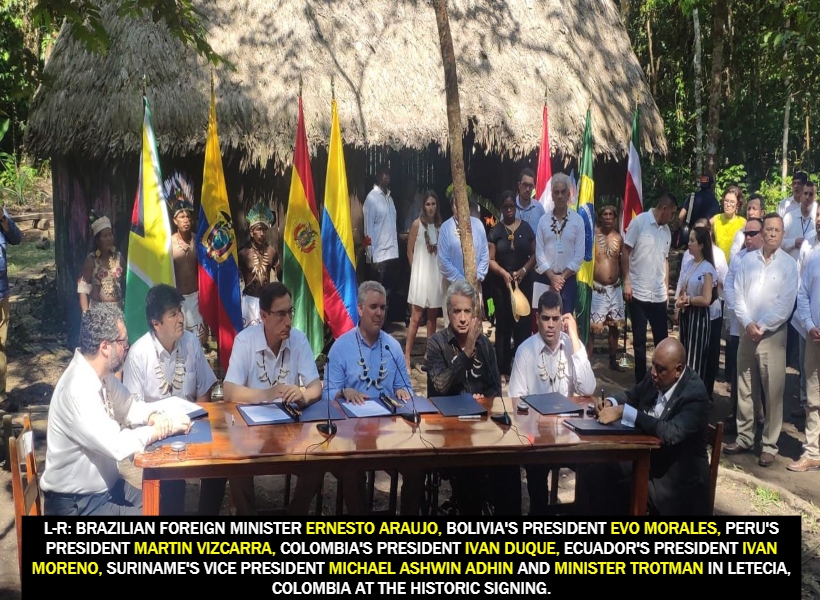 Facebook
Twitter
Google+
Pinterest
WhatsApp
Guyana joined six fellow Amazonian countries yesterday in Letecia, Colombia to sign a pact to protect the world’s largest tropical forest.
The pact, signed at a time when the Amazon is under threat from fires, aims to coordinate disaster response and satellite monitoring.
Minister of Natural Resources Raphael Trotman, who represented President David Granger, signed on behalf of Guyana. Colombia’s President Ivan Duque, Bolivia’s President Evo Morales, Ecuador’s President Lenin Moreno and Peru’s President Martin Vizcarra were the heads of state who signed.
Suriname’s Vice President Michael Ashwin Adhin and Brazil’s Foreign Minister Ernesto Araujo signed the pact on behalf of their respective countries.
Minister Trotman, in delivering a message on behalf of President Granger reiterated to the South American leaders that, “our President is the visionary who conceptualized the Green State Development Strategy (GSDS) for Guyana – it is our lighted path towards attaining a green and sustainable economy and is open to be shared and improved upon.”
“An inferno in the Amazon, two-thirds of which is in Brazil, and the reason for us being here, threatens the rainforest eco-system and also affects the entire globe,” Minister Trotman related.
“The effects of damage to the Amazon go far beyond Brazil and its neighbours. We are the lungs of the earth, we must all breathe to live. Therefore, our presence here is in recognition of the value and importance of the Amazon, and the Guiana Shield, and our role as custodians, stewards and guardians of it,” Minister Trotman asserted.
The Amazon is the world’s largest rainforest which produces approximately 20 percent of earth’s oxygen and spans 8 countries, including Guyana. It covers 40 percent of South America, is inhabited by 30 million people and is home to vast numbers of mammals, birds, amphibians and reptiles, most of them, unique to the region. New plant or animal species are discovered at a rate of one every two days in the Amazon.
Guyana’s ambassador to Brazil, George Talbot joined Minister Trotman who was accompanied by Head of the Forest Carbon Partnership Facility Project (FCPF), Mr. Clayton Hall. Minister Trotman and Mr. Hall travelled with the Surinamese delegation yesterday and returned to Guyana last evening.