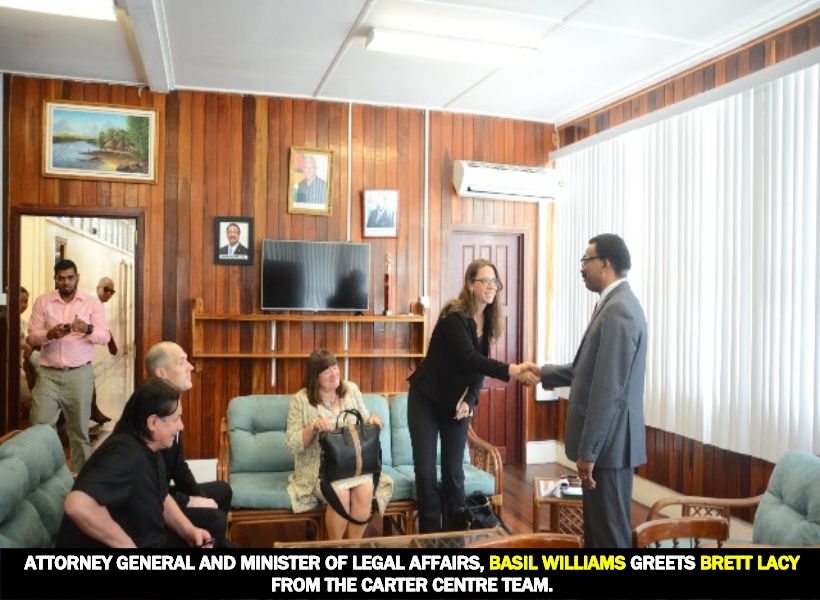 The issue of overseas voting in the upcoming General and Regional Elections was once again brought to the fore this morning when Attorney General and Minister of Legal Affairs, Basil Williams met with the United States-based Carter Centre.

The meeting with the four-member team addressed a range of issues including the legislation engendered by former United States (US) President Jimmy Carter which ended overseas voting here.

AG Williams said it was under the election laws amendment Act Number 3 of 1991 that the legislation was put forward.

“[The law] provided that only citizens in embassies and High Commissions and their families could vote and they buttress that position by the constitutional amendment Act number 4 of 1991… they did a lot of work,” the AG told the media following the two-hour meeting.

The team was shown the Constitutional Reform Report, often utilised by the courts, which specifies the requirement of residents to be in Guyana at the time for elections.

The Attorney General said while the issue was not argued before the Acting Chief Justice in the recent challenge to House-to-House Registration, her ruling which states that the names of persons should not be removed from the list, suggests that overseas voting exists.

“If you are saying that people who have registered prior and are abroad are still eligible to vote, even though they did not take part in the compilation by House-to-House [Registration] of a new register by being resident in a division in Guyana, we have to show that by the Carter intervention overseas voting was outlawed.”

The government has already moved to the court to appeal that part of the CJ’s ruling.

Among the other issues addressed were the government’s interest in credible elections, the legal situation of the country and the state of the Parliament, the Executive, the Judiciary and the Guyana Elections Commission (GECOM).

Carter Centre’s Brett Lacy said the team’s meeting with the Attorney General provided the opportunity to hear about Guyana’s laws and the arguments relating to circumstances in the country. She said her team is in Guyana only to meet with and listen to the various actors.

The team will meet with other teams throughout its one week stay in Guyana. (Article extracted and modified from the Department of Public Information)