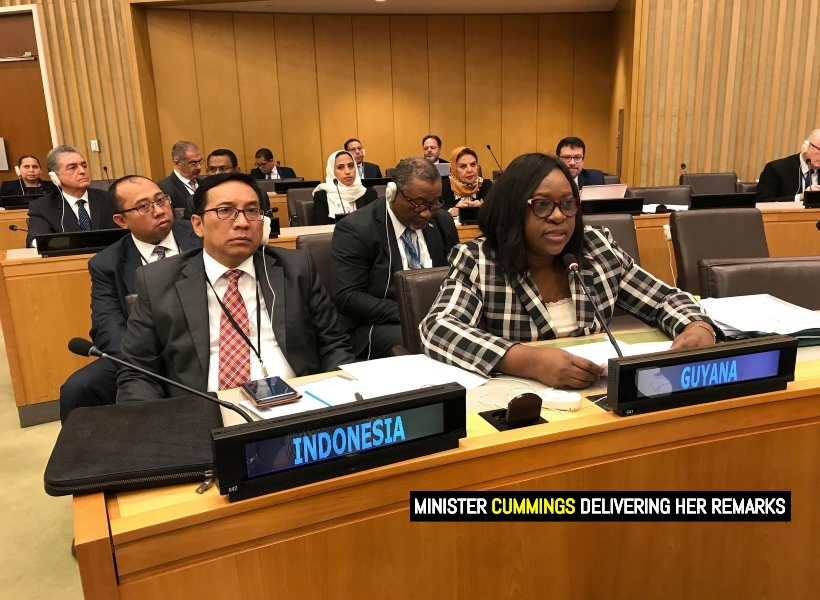 The Minister delivered remarks in this regard at a High-Level Breakfast Meeting on Pathways and Partnerships to Leverage the Energy Transition for Climate Resilience and Sustainable Development Co-Benefits in Small Island Developing States (SIDS).

It was organized on the margins of the 74th United Nations General Assembly in New York by the Joint International Renewable Energy Agency (IRENA), United Nations Office of the High Representative for the Least Developed Countries, Landlocked Developing Countries and Small Island Developing States (UN OHRLLS), Alliance of Small Island States (AOSIS) and the Republic of Palau.

“The Government of Guyana is committed to reviewing its NDCs in 2020 and introducing clear, measurable and realistic targets following baseline assessment,” Minister Cummings said.

After ratifying the Framework Convention on Climate Change (FCCC) in 1994, Guyana began developing its national environmental strategy and, in 2009, launched the Low Carbon Development Strategy. Presently, the Government’s efforts are focused on the Green State Development Strategy: Vision 2040.

The Government of Guyana, through the Department of the Environment, has been an active participant in regional and international meetings in the lead-up to the mid-term review of the SAMOA Pathway. These engagements included the regional meeting of progress in Belize (2018), focal points meeting in Samoa and the recently concluded meeting in Cabo Verde on localizing the Samoa Pathway in SIDS.