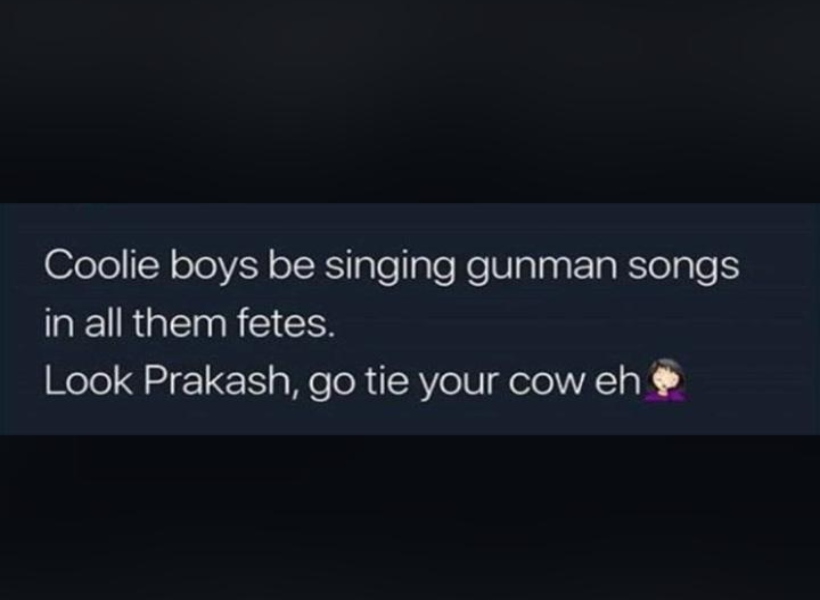 Using names of persons as adjectival elements in utterances is not unheard of in Guyanese Creole and English. In fact, it is quite common, especially when one exhibits traits similar to that of another. You can call an aspiring cricketer the “Brian Lara of Port Mourant”, or the “Clive Lloyd of Linden”, depending of course, on where that individual resides.

In July this year, an individual named Prakash escaped a jailhouse. The article of Prakash’s escape resulted in a wave of comments on social media. Many conveyed the belief that one who carries a name like Prakash is most likely not smart.

So, the name Prakash is now being used to describe Indo-Guyanese men, especially those considered “not all there”. In fact, there is a meme that goes to the effect, “Coolie boys be singing gunman songs in all dem fetes. Look Prakash, go tie your cow eh.”

Where did the name Prakash come from?

Prakash originated from the Sanskrit language and it translates to “light”.

So, a name that was used to represent purity now means an Indian man, who is not very smart and apparently one who has a cow that was left untied.

How did it come to this?

It is known that languages evolve as speakers make modifications to the way they communicate. These changes are often effected by gradual deviation from the conventional meaning of words and phrases, which is referred to as “Semantic Shift”. Also, languages change with the addition of new words and phrases.

Pejoration, seems to describe what we see happening to Prakash. Pejoration is the term used to describe the phenomenon in which a word changes from a “positive” meaning to a “negative” one. However, there seems to be more than pejoration at play when these bits of evidence are presented: the meaning of a highly religious/cultural name is arbitrarily dissociated with pureness, and used only to refer to stupidity within a specific gender of a specific group; oh and not to forget, it also means having a cow. There are other words to be used that can be regarded as derogatory.

But how did Prakash make it into our language?

There are a number of ways in which words and phrases can be added to a language. Take slangs for example. Some have even made it into the dictionaries because of constant usage. Beyoncé’s “Bootylicious” was admitted into the Webster’s Dictionary, and it is listed as an adjective used to describe someone (not gender-specific) that is “sexually attractive, especially with curvaceous buttocks”. Yea, it is unlikely that Prakash was introduced this way into our vernacular.

Then there is “borrowing”. This is when words are taken from other languages and are added to another language. This is quite common among languages. For example, the word “pajama” was taken from Urdu and added to English. There are many words within the English language that were borrowed from French, Spanish and other languages.

Prakash was also borrowed since it originated from Sanskrit, and was probably brought to these shores by Indians 181 years ago. The name is also a popular one that is given by a pundit as part of a religious or traditional naming practice still being observed today by Hindus in Guyana. Therefore, to use such a word to describe stupidity can be deemed insensitive to followers of a particular religion, who revere this name the same way as they would “Bhagvan” (God).