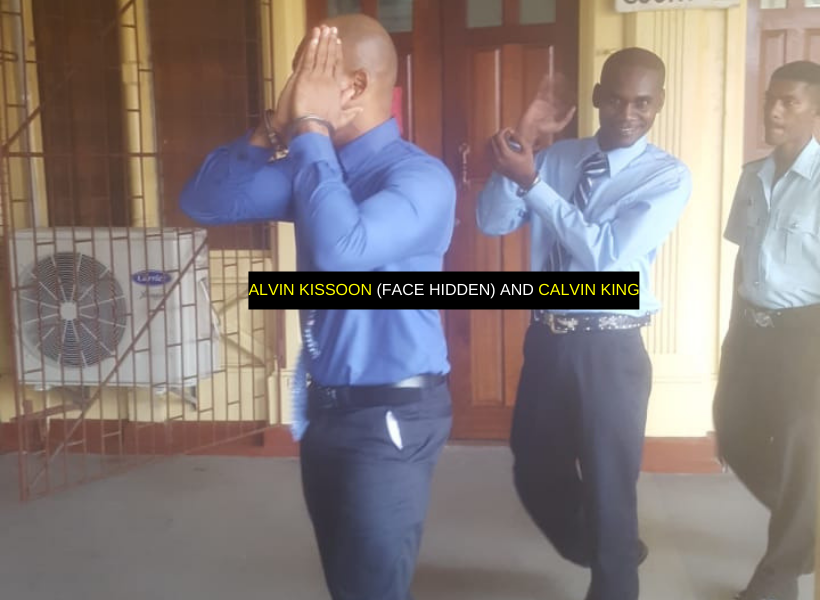 Two men are presently on trial before Justice Sandil Kissoon and a 12-person jury at the High Court in Demerara. The men, Alvin Kissoon and Calvin King, are both accused of murdering security guard, John Christopher Friday who was killed when bandits broke into the Lethem Post Office between January 18 and 19, 2013 and carted off millions of dollars.

State Prosecutor Abigail Gibbs is contending that Kissoon and King travelled to Lethem from Georgetown and robbed the post office. The two murder accused are being represented by lawyers Adrian Thompson and Lyndon Amsterdam.

When the trial continued this morning, State Prosecutor Abigail Gibbs called the fourth witness. The witness (name withheld) testified that during January 2013, she was the Manager at her mother’s hotel located at Lot 71 Windmill Road Tabatinga, Lethem. She said that on January 16, 2013, around 10:00hrs four men and a woman came to the hotel in a car. She said they were carrying a big silver box, something looking like a crate.

She identified one of the men as King who was seated in the prisoner’s dock. She identified the other men as only Kissoon and Jason. She could not recall the woman’s name. According to the witness, Kissoon and the woman stayed in Room Three, while the other three men stayed together in Room One. She said that King, who paid for the rooms, booked them for three days.

She recalled that on January 18, 2013 at around 13:00hrs King asked her to go the Lethem Post Office and collect some money for him because at time he did not walk with his identification card. She said she collected the monies which amounted to $20,000. She added that the last time she saw the five persons was on the said day at around 17:00hrs, and only realized that they had left the hotel at around 19:00hrs because none of them booked out.

Yesterday, another witness told the court that she has been employed with the Guyana Post Office Corporation (GPOC) for the past 29 years. She added that during January 2013, she was attached to the Lethem Post Office as a Post Mistress. She said that before leaving work for home on January 18, 2013, she secured to safes which contained a total of $4.6M in cash, phone cards and other valuables.

According to her, the following day, a staffer of the Lethem Post Office came to her home and told her something which caused her to rush down to the post office which was at the time housed in the Regional Democratic Council (RDC) office. She said that upon her arrival she saw police ranks at the scene who informed her that the post office had been broken into.

The witness said that on checking the both safes, she discovered that all the monies were missing. This trial is continuing.