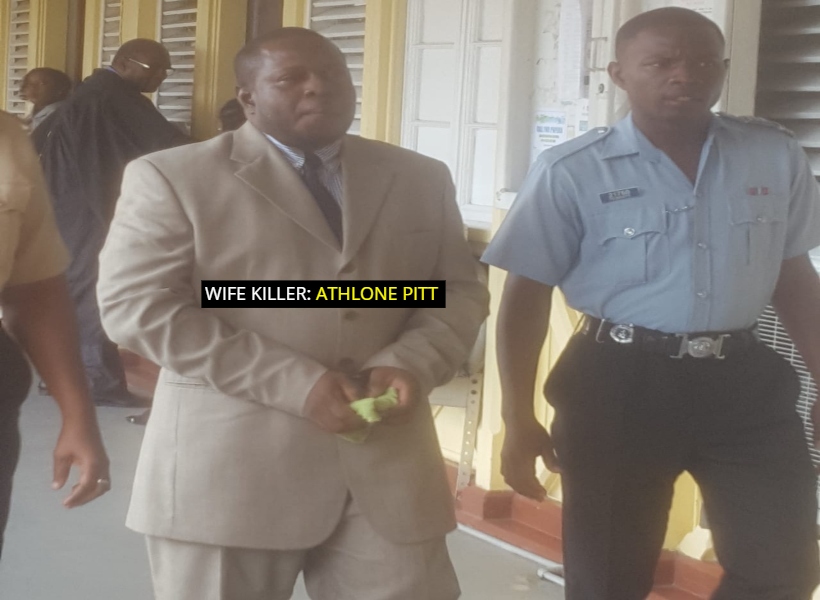 45-year-old Athlone Pitt wept uncontrollably as he pleaded with the court for mercy in sentencing him for the murder of his wife Cindy. Pitt hacked Cindy to death with a cutlass on June 01, 2016 in the compound of the Bygeval Secondary School where she worked as a security guard.

Justice Jo Ann Barlow handed him a 22 years jail sentence when he reappeared before her this afternoon at the High Court in Demerara. He appeared before the Judge about two weeks ago and pleaded guilty to manslaughter, thereby admitting that he unlawfully killed his 31-year-old wife. Pitt was initially indicted for murder.

State Prosecutor Sarah Martin, in relating the short facts, said that Pitt became upset after rumors circulated of his wife of over 10 years being unfaithful. The prosecutor said that on the day in question, Athlone armed himself with a knife and cutlass and went to the school where he chopped his wife, and her cousin, Brenda Thomas. He then turned himself over to police and handed over the murder weapons. Both of the injured women were taken to the hospital where Cindy was pronounced dead on arrival.

This afternoon, Pitt pleaded guilty to another charge in relation to wounding Thomas. That charge alleged that on June 01, 2016, in the county of Demerara, he unlawfully and maliciously wounded Thomas with the intent to cause her grievous bodily harm or to maim, disable or disfigure her. He was handed an eight-year prison sentence on this charge. The two sentences were ordered to run concurrently by the judge, meaning that the confessed killer will only spend 22 years behind bars.

The Probation Officer also told the court that Cindy’s family said that they were aware of the struggles their loved one was facing in her marriage, but could not intervene, as she told them she loved her husband. Further, it was revealed that the couple was facing infertility problems on the part of the husband who said that his wife was being encouraged to pursue other relationships in order to become pregnant. Pitt, in his address to the court, extended an apology to his wife’s family and begged the court for leniency.

The prison authorities were ordered to deduct from the sentence the time Pitt spent in pre-trial custody.