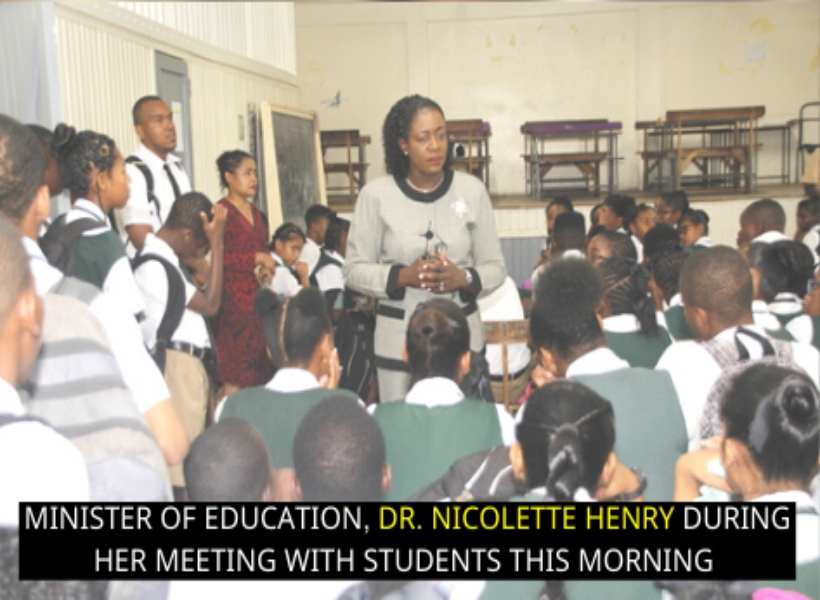 Recently, a video was widely circulated on social media that captured two students of Richard Ishmael Secondary, male and female. The short video showed a male student, wearing long pants, beating up on a younger girl who was struggling to get up from a grassed area in the school’s compound.

Initially, Minister of Education, Dr. Nicolette Henry reportedly told Guyana Times that there was nothing unusual about the situation. She was quoted saying “Students fight, there is nothing unusual as you would know, you have gone to school and we all would have saw.”

However, based on indications today, the Ministry has changed her position and is now treating the matter as one of importance which should be addressed.

This morning, the Ministry of Education issued a press release that stated, “Minister of Education Dr. Nicolette Henry today met with the entire student population of Richard Ishmael secondary along with the teachers. At a special assembly, the Education Minister encouraged the children to find other ways apart from violence to deal with diverging views and conflicts.”

Education Ministry reported that the Minister told the children that there is a “certain behaviour that is set out in the school policy that they should at all times adhere to. Dr. Henry told the students that any deviation from what is expected will be dealt with firmly.”

The Minister of Education told the students that they should make maximum use of the educational opportunities that are available to them, and not be distracted by undesirable situations that are unproductive and will not help their development.

The Minister of Education also met separately with the teaching staff and had discussions with the teachers who gave feedback and shared suggestions. Minister Henry reminded the teachers that they are the mainstay of the Education sector and she will ensure that their welfare and safety are always paramount.

Further, Dr. Henry told the teachers that the School’s Welfare Department will be utilizing the services of one of the Mobile Psychosocial Unit to address issues affecting both students and teachers at that school.

In addition, the ministry reported that the students that were involved in the fight met with Dr. Henry and were made to apologize to each other.

It has also been revealed that Minister Henry ordered a detailed investigation into the incident.

Ministry of Education said that preliminary recommendations are being examined which includes disciplinary actions, anger management sessions, and referral for specialized services for persons involved in the incident.