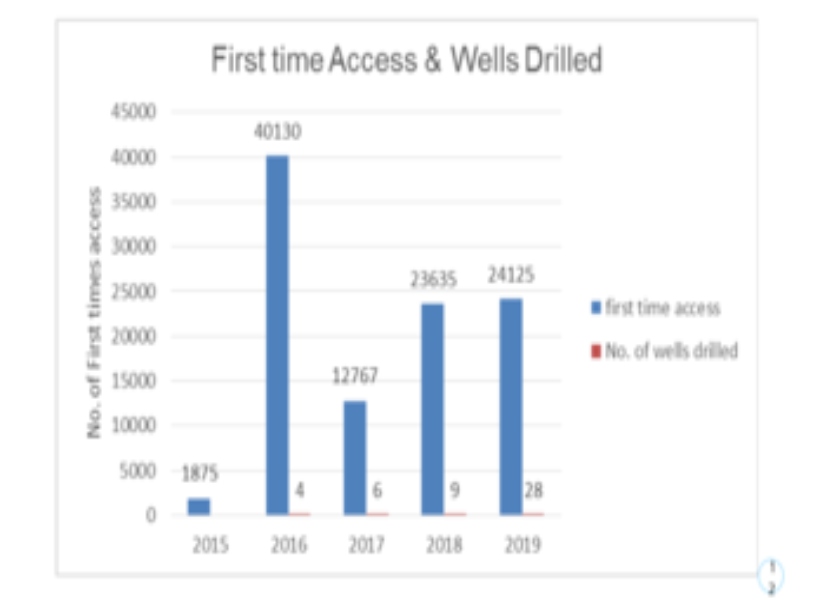 The General Manager (GM) of the Guyana Water Incorporated (GWI), Dr. Richard Van West-Charles, reported today that some 28 wells were drilled this year. This project would have assisted in some 24,125 citizens from six regions: One; Three; Four; Eight; 9 and 10, being able to access potable water for the first time. Additional works were also carried out on existing structures to improve distribution.

In Region One (Barima/Waini), new wells were drilled at Kamwatta, Whitewater, Baramita, as well as the upgrading of the Water Supply System at Port Kaituma.

In Region Two (Pomeroon/Supenaam), an expansion of transmission mains was done from Lima Sands to Capoey, Mainstay and Hill Top.
New wells were drilled at Vergenoegen, Pouderoyen, Uitvlugt, and WestMinster in Region Three (Essequibo Islands/West Demerara).

In Georgetown, Region Four (Demerara/Mahaica) at the shelterbelt Water Treatment Plant (WTP), GWI’s General Manager (GM) Dr. Richard Van West-Charles reported that the installation of alum mixers, flocculators, calcium hypochlorite tanks was completed, including the fitting of six dust extractors. He noted also, that the installation of mains in Albouystown is currently 90% advanced.

On the East Coast of Demerara, West-Charles noted that the agency replaced three transformers: two at Lusignan and one at Helena to minimise voltage imbalance at the stations.

New distribution mains were installed in Orealla, Region Six (East Berbice/Corentyne), as well as the expansion of the WTP area coverage to Sandvoort.

In Region Seven (Cuyuni/Mazaruni), the agency upgraded the WTP at Bartica.
The GWI installed a water filtration system at the Kato Secondary School, Potable Water Supply System in Paramakatoi, in Region Eight (Potaro/Siparuni). A new well was also drilled, along with the installation of an accompanying distribution network, submersible well pump, and service connections at Campbelltown.

A total of 16 new wells were drilled in Region Nine (Upper Takatu/Upper Essequibo), giving access to more than 5000 residents for the first-time. Drilling of these new wells and the installation of water distribution networks were carried out in Aishalton, Nappi, Parishara, Aranaputa, Shulinab, and Meriwau.

Works were also carried out in Linden, Region 10 (Upper Demerara/Berbice), where the agency rehabilitated the intake dock at West Watooka, and the drilling of three Wells at Amelia’s Ward.