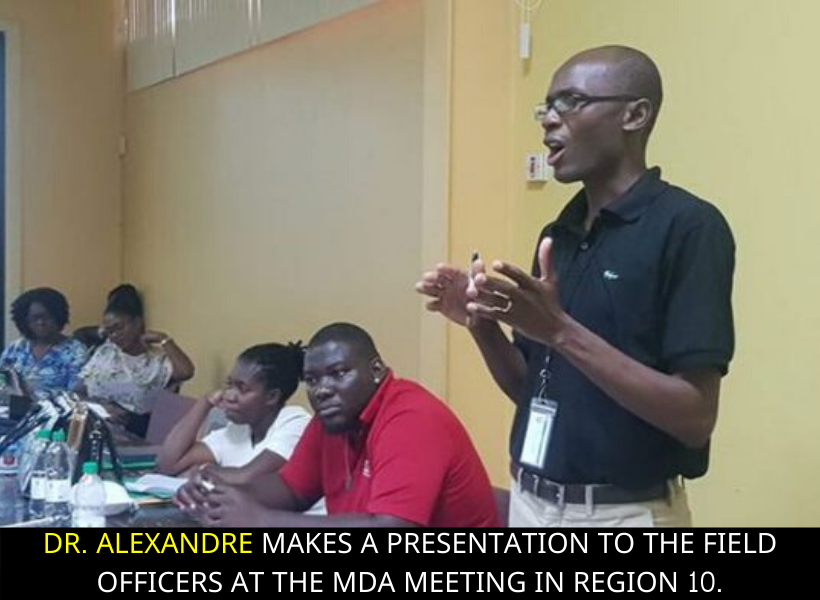 The Mass Drug Administration (MDA) campaign to make Guyana filarial-free by year-end is underway. The campaign commenced with the hosting of the first Regional MDA meeting for 2020 in Linden.

Officials from the Pan American Health Organization/ World Health Organization (PAHO/WHO), the Ministry of Public Health and Region 10 MDA campaign organisers met to reflect on the 2019 campaign and discuss the best practices that need to be implemented.
According to Dr. Jean Alexandre, PAHO’s Adviser, Health Surveillance Disease Prevention and Control, Region 10 was the most challenging in 2019. It was noted that while the 2019 campaign reached 68 percent coverage in that area, it was the lowest compared to other regions that achieved between 72 percent to 90 percent coverage.

Dr. Alexandre explained that the main contributing factors were that the Upper Demerara-Berbice region was the last to be targeted and this followed reports in certain sections of the media that there was at least one fatality following the pill distribution.

“Those allegations that the pills were killing people…would have negatively influenced people, so there were a number of refusals here, in Region 10,” Dr. Alexandre stated. A post-mortem on the victim later revealed this was far from the case.

He called for more responsible reporting surrounding the MDA campaign in 2020. Additionally, to ensure a more effective countrywide campaign in 2020 there will be more conscientious training with the pill distributors to ensure they are capable of public education and sensitisation, while in the fields.

During the meeting, field officers discussed the various mechanism that should be adopted in the 2020 campaign, including working more suitable hours to meet the target audience, more sensitization efforts, timely delivery of pills to field distributers amongst others.

Dr. Alexandre expressed optimism that better results will be derived from the 2020 MDA, which is slated for October. (Department of Public Information)