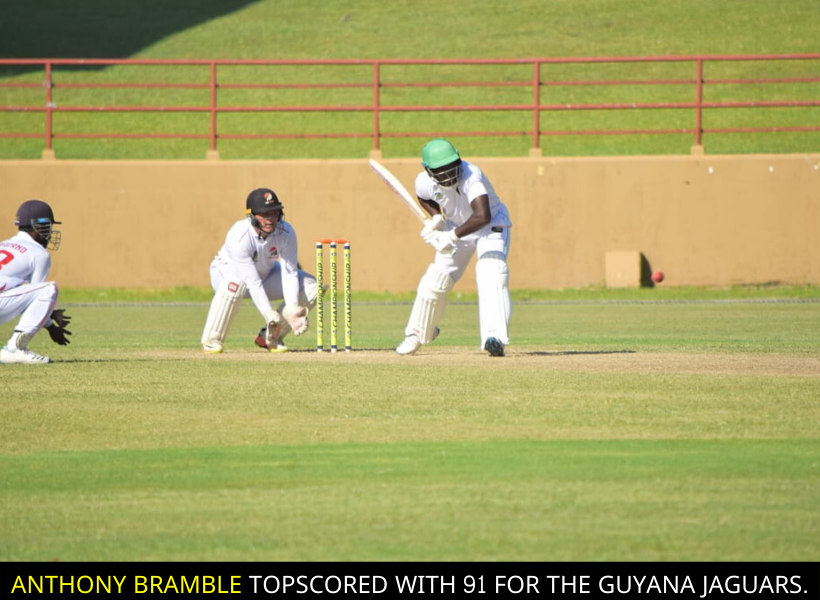 Guyana Jaguars young fast bowling sensation, Nial Smith’s dream start to first-class cricket continued on Friday at the National Stadium Providence, after his second five wicket haul in three games sunk Trinidad and Tobago Red Force for 98 all out to hand Guyana a sizable advantage at stumps on day two of their CWI Four-Day clash.

After Smith’s heroics, the Jaguars openers, Tagenarine Chanderpaul and Chandrapaul Hemraj notched up an unbeaten half-century stand to hand Guyana a lead of 278 heading into the third day’s play on Saturday.

Earlier in the day when play resumed, wicket-keeper batsman Anthony Bramble picked up right where he left off and added 28 to his overnight 63 to fall 9 short of a century (91 off 77 balls 14x4s, 3x6s). He was caught by Joshua DaSilva off the bowling of Terrance Hinds.

However, tailender Devindra Bishoo hit a handy 27 (4x4s) and added 17 with Versammy Permaul before he perished; that sparked the end for Guyana as Permaul fell to Bryan Charles while Smith was bowled by Darren Bravo with the Jaguars all out for 323.

Known for their batting prowess, the Red Force began their run chase with confidence but pacer Keon Joseph disturbed opener Keegan Simmons’ stumps with the score at 12, this sparked a top-order collapse and spelled the beginning of the end.

Smith was brought on and bowled Bravo for just one run and then had Jason Mohamed trapped LBW for a first ball duck to leave Red Force reeling at 13-3.

Solanzo (27) was the only batsman to offer resistance as wickets kept tumbling around him; DaSilva made just one before Smith had him trapped LBW and bowled Yanic Cariah for a duck with the Red Force in dire straits on 20-5.

However, Solanzo struck up a brief partnership with Yannick Otley (22) to marshall Red Force to 50, but Smith’s return to the attack saw him sending Solanzo back to the dressing room.

At 51-6, the Red Force tail managed an additional 47 runs with Permaul rounding up the remaining four wickets as the Trinidadians crumbled for 98 all out.

At the close of play, openers Chanderpaul and Hemraj were unbeaten on 29 and 22 respectively with the Jaguars on 53 without loss and a lead of 278.

The Jaguars will resume their second innings on Saturday morning and look to build an unassailable lead with an eye on an outright win.