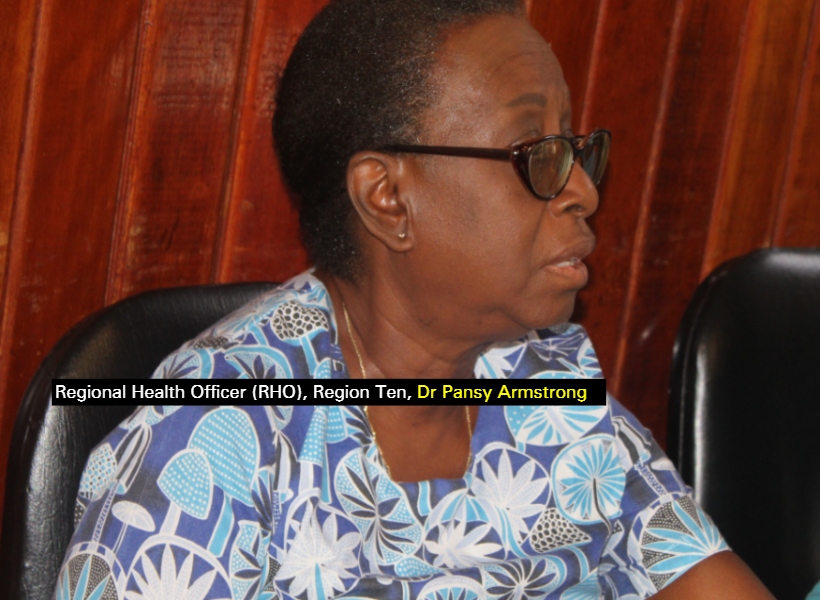 (RDC 10 Release) – The recent appeal by the Regional Health Officer for Region Ten, Dr Pansy Armstrong’s call for persons who would have interacted with the first or second victim infected with COVID 19 in the region to present themselves to be tested has yielded fruits.

The RHO disclosed that a few days ago, samples taken from ten persons were sent to Georgetown to be tested as these all formed part of the contact tracing being done by the region. She disclosed that the results returned with nine persons being negative and one positive.

Dr Armstrong said that the 40-year-old patient was taken to the Diamond facility last night by the RHEC. She disclosed that while the patient initially was reluctant to go to the facility, they were able to impress upon the patient that it is mandatory once tested positive.

“The patient had expressed reservations about going but I was able to convince him that he must go as it’s part of the new regulation and he complied. He is one of the now 73 cases in Guyana,” the RHO said

She said that the regional investigation has found that the infection thus far in Region Ten is a cluster and not community spread, noting that the third victim had close relationship with the first patient who died recently. This, she stressed was able to be revealed through the contact tracing
that was introduced by the region.

She disclosed that the patient had confessed that he had no signs of COVID 19 and as such, her health officials are concerned within the region that they may be others who could have been infected but also asymptomatic.

“It’s interesting to see that the patient has not demonstrated no signs and symptoms of the disease but is tested positive, which is an indication that there may be
others in similar position,” Dr Armstrong.

Meanwhile, Regional Executive Officer (REO), Orrin Gordon reaffirmed his appeal for persons to take all required precautions, warning that the infection rate will continue to climb if people are lax in their protection.

“Now that we have found that this individual had contact with the first patient it means that we would now have to circle this individual and those that he may have gotten in contact with to see if there are any others who may have been infected. This would now give us an idea of the scope
of the virus in that kind of cluster environment. As all that we have so far is basically those who have been in this cluster, so we are trying to lock down the cluster and thankfully we have not had any other person outside of that cluster,” REO Gordon said

The REO went on to state that the reality of stigma is real, noting that the patient expressed this very concern regarding his family. He said the patient agreed to be taken to Georgetown on the condition that the ambulance and authorities will not pick him up from his home but at a separate location.

“The patient was very concerned about the stigma and didn’t want his family to suffer any stigma and or undue embarrassment, so he opted for the ambulance to pick
him up somewhere else,” the REO said.

This is the third person who has been tested positive for Region Ten. On April 8, Sydney Trellis was identified as the first patient, who subsequently died and on the 14 th of April; the second patient who is the lone female thus far was identified and is still in institutional isolation.