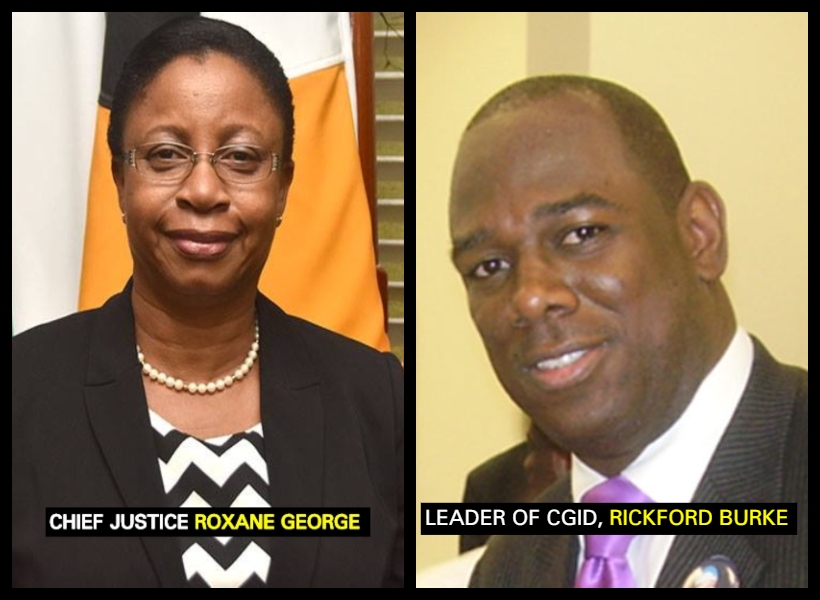 Leader of the New York-based Caribbean Guyana Institute for Democracy (CGID) and well-known political commentator, Rickford Burke has lost a $60M defamation lawsuit he filed against the Guyana Times media group, Multi Technology Vision, Channel 14/65 and the Little Rock Television Station, Channel 10. Judgment in the lawsuit filed as far back as 2013, was handed down last month by Chief Justice Roxane George.

As a result, Burke was ordered to pay $100,000 in court costs to Guyana Times and MTV Ch. 14/65, and a similar cost in the sum of $200,000 to Channel 8; bringing the total costs awarded against him to $400,000. In Court documents seen by Guyana Standard, Burke had taken the media companies to court over the publication and broadcast of false and slanderous content alleging that he had been arrested in New York, and charged with identity theft on January 15, 2013.

During a trial, Burke, led by his lawyer, Nigel Hughes denied ever being charged with identity theft. And as a result testified that the publication of the articles and broadcast caused his character and reputation to be damaged in the eyes of “right thinking persons.” Burke also sought to highlight his reputation among the diplomatic and political circles, and in the Caribbean diaspora community, all in New York, USA.

In dealing with the evidence Burke proffered against MTV Ch. 14/65, Justice George held that there was no supportive evidence that the programme ‘Straight Talk’ in which Burke alleged carried the libelous content about him was broadcast on that station. In fact, Justice George said that she found the evidence of Rajesh Lakhan of this TV station that the station never broadcast this program to be more credible.

“This witness was not specifically challenged in relation to whether the station broadcast the story. The plaintiff’s [Rickford Burke] brother testified that he saw the TV program but he has no recording or transcript of it. He maintained the program was aired on MTV Ch. 14/65 but acknowledged he had no other evidence besides his,” the Chief Justice noted in her written ruling.

Having regards to the foregoing, the Chief Justice ruled that she did not find that Burke has proven his case against MTV Ch. 14/65, and as such dismissed the lawsuit, with court cost in the sum of $100,000 being awarded against Burke. MTV Ch. 14/64 was represented by lawyers Sanjeev Datadin and Charles Ramson Jnr.

As regards the Little Rock Television Station, the Chief Justice concluded that there was no evidence about any broadcast to that effect on this TV station. According to Justice George, Burke’s evidence in this regard was based on what he was told which she concluded is inadmissible hearsay.

The Chief Justice said that Burke admitted that he did not know if a transcript of the program had been prepared and submitted to his lawyer, and that none of the witnesses who testified on his behalf said anything about that television station.

The Chief Justice, therefore, found that Burke failed to prove his case against Little Rock TV Station, and dismissed the claim awarding cost to the tune of $200,000 because no, or no admissible, evidence was led.

However, as regards Guyana Times [the second named defendant], Justice George concluded, not only based on Burke’s evidence, but on evidence on behalf of this defendant, that the words alleged “Rickford Burke charged for Identity Theft” were published in the Guyana Times newspapers on January 31, 2013.

At trial, Guyana Times contended that it believed the information which referred to a Wilton R. Burke being charged to be true: that “on or around 15th January, 2013, the New York Police Department laid charges in the Kings Criminal Court, Case #2013KN003941 against a person named Wilton Burke”.

That further, Guyana Times submitted to the court that it was informed by its sources that the information referred to Burke.

“The witness for [Guyana Times], Michael Younge, who was a Senior Reporter/ Assistant Editor at the time, said he received an email with an attachment with the information from the Press and Publicity Unit of the Office of the President which was then headed by Kwame Mc Koy,” Justice George outlined in her nine-page judgment.

Younge said he attempted to contact Burke after the publication of the article and that he was aware of the subsequent publication of an article of February 13, 2013 in the Guyana Times which in effect amounted to a retraction of the January 31, 2013 article.

According to Justice George’s written judgment, “He [Younge] subsequently said they tried to verify the case number after the January publication. At the time of publication he did not know whether [Burke] was named Wilton. He relied on the information from the Office of the President that the ‘R’ in the article referred to [him]. He admitted that he had no document that referred to [Burke] as “Rickford Burke” in relation to his verification of the document he received from the Office of the President. He based his verification solely on what he was told by Mr. Mc Koy. He said they requested from Mr. Mc Koy whether he had additional information as proof but such information was never provided.”

Guyana Times’s lawyer Ronald Burch-Smith argued that evidence led can only relate to the publication in the Guyana Times newspapers of January 31, 2013, and that the evidence about subsequent publication online cannot be taken into account, as apart from being separate publications which were not referred to in the statement of claim, as online publications have to be treated separately. The second issue raised by the lawyer is as regards where the publication occurred vis-a-vis the jurisdiction where Burke says he suffered damage to his character.

Justice George noted, “[Burke] did not produce the paper edition of the publication. He and his witnesses never testified to having read the paper edition of January 31, 2013. None of them gave specifics of what they read. The evidence lends to the view that the publication was done in Guyana. There is no evidence of damage to [Burke’s] character in Guyana. [His] brother said he was angry at the broadcast on TV and had a similar reaction when he subsequently read the newspaper. [Burke] led no evidence about his reputation in Guyana.”

It is against this backdrop the Chief Justice concluded that while Guyana Times did publish the words “Rickford Burke charged for identity theft”, Burke failed to make out a case because there is no evidence that the publication made in Guyana, resulted in his reputation in Guyana being affected. Further, the Chief Justice held that having reviewed the law on defamation the defence of qualified privilege was available to Guyana Times.

Justice George noted, too, that she was satisfied that qualified privilege was established, so then the issue of malice would have to be considered.

“Apart from not being pleaded, there is no evidence of malice on the part of [Guyana Times]. Also in this regard, consideration has to be taken of the retraction which, though referred to in the Statement of Claim, [Burke] claims to be unaware of,” the Chief Justice concluded in awarding another $100,000 in court costs against Burke.