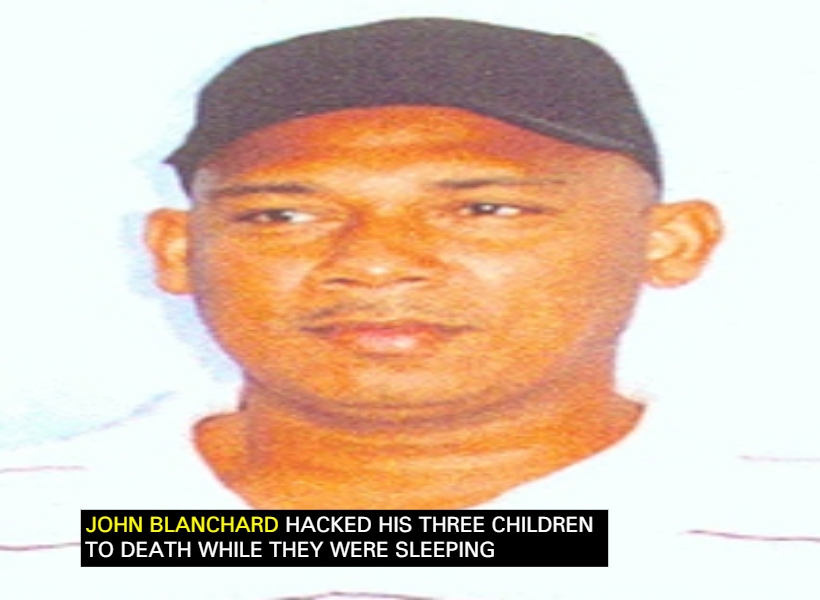 The life sentence which was handed to John Blanchard for hacking his three children to death at their Soesdyke, East Bank Demerara (EBD) home, was today affirmed by the Court of Appeal.

Blanchard, who had pleaded guilty to the lesser count of manslaughter, had moved to the Appeal Court challenging his life sentences.

The confessed killer had argued that the sentences are manifestly excessive and severe in all the case circumstances.

During his court appearance in June 2016, before Justice Jo-Ann Barlow, John Blanchard, who was initially indicted for murder by State prosecutors, opted to plead guilty to the lesser offence.

He was handed the life sentence in relation to each of the killings with the possibility of becoming eligible for parole after serving 30 years.

According to previous reports, on the night of October 11, 2011, the father armed himself with a cutlass and two knives and went after the sleeping children whom he stabbed and chopped repeatedly.

His stepdaughter, Belika George, and his son Daniel Blanchard died immediately. His daughter Joy Blanchart, who suffered numerous chop wounds about her body and was hooked up on a life support machine at the Georgetown Public Hospital, died a few days later.

It was reported that at the time he committed the killings, his wife Onica Blanchard was in Mahdia, where she had been working at a mining camp.

He had reportedly confessed to killing the children to her during a telephone conversation.

During his court hearing before Justice Barlow, John Blanchard broke down in tears, saying he did not know what could have caused him to commit such an act on his own children.

The appeal was heard by Chancellor of the Judiciary Justice Yonette Cummings-Edwards and Justices of Appeal Dawn Gregory and Brassington Reynolds.

In passing down a ruling, Justice Cummings-Edwards dismissed the appeal and stated that the conviction and sentence still stand.

In her ruling, Chancellor Edwards noted that the trial judge did not make any error concerning the deduction of the sentence. In fact, the CJ pointed out that the court was lenient in accepting his manslaughter plea rather than murder.