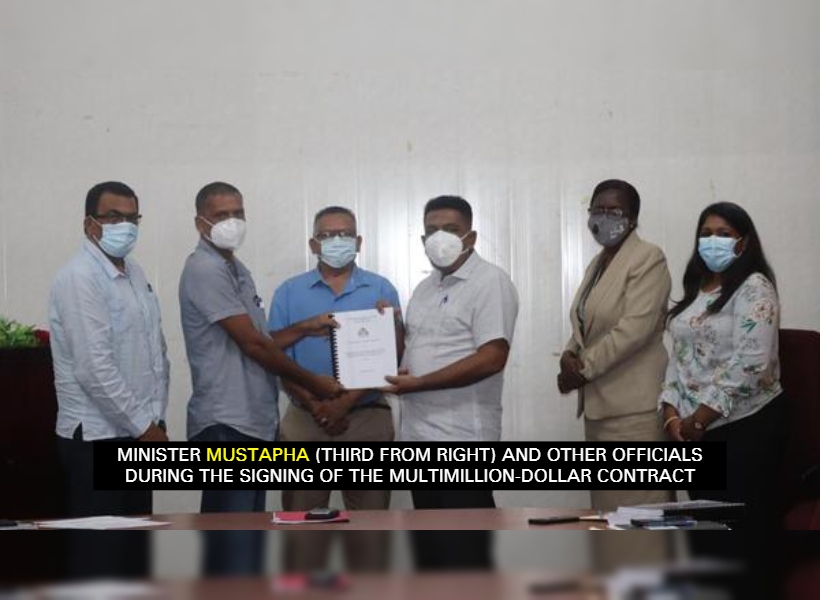 With government announcing transformative measures for Guyana’s aquaculture sector, the Satyadeo Sawh Aquaculture Station is expected to benefit from a series of upgrades during the year.

Last week, the Fisheries Department of the Ministry of Agriculture inked a $39,912,372 contract with Doodnauth Construction and Supplies, which will see a series of upgrades and expansion to the facility which is located on Agriculture Road, Mon Repos.

During the contract signing, Agriculture Minister Zulfikar Mustapha stressed the importance of having those projects completed in a timely manner.

With works scheduled to commence at the facility in the coming week, Minister Mustapha said that the works are intended to significantly increase the aquaculture station’s current capacity.

“The expansion of the Satyadeo Sawh Aquaculture Station will double the present capacity of the facility and improve its ability to deliver on a wider selection of species for research and make available to farmers for grow-out. Species that will be targeted are lukanani, patwa, tambaqui, kreteke/snail, hassar, and arapaima. Upgrades to the facility will include the construction of seven 46’ x 23’ concrete ponds, the construction of 540 feet of earthen road, as well as the erection of a 1690 feet fence,” Minister Mustapha said.

Minister Mustapha further stated that the upgrades were in keeping with government’s plan to further develop the country’s aquaculture sector.

“Since taking office last August, government has been pushing and promoting the development of the local aquaculture sector. After closely examining the layout and land available at the aquaculture station, a decision was taken for several upgrades to be made to develop the facility and, by extension, the sector. If we are going to promote and develop aquaculture in Guyana, fisherfolks need to have access to a certain amount of fingerlings at any given period. This is why we needed to ensure we utilize the available space, construct additional ponds, and execute an overall upgrade,” Minister Mustapha said.

Apart from contracted works, Minister Mustapha disclosed that the National Drainage and Irrigation Authority (NDIA) will also be assisting the Fisheries Department with clearing 7.5 acres of land for the expansion and the construction of 23 earthen ponds of various sizes.

These works are expected to be completed by the first week in September of this year.

Over the last eight months, government has taken several steps to reorganize and rejuvenate the sector. Back in March of this year, Guyana National Fisherfolk Organization (GNFO) hosted their second national election after lying dormant for some time.
Furthermore, His Excellency, President Dr. Irfaan Ali had announced that government will soon launch an aquaculture ‘master plan’ that will see the sector taking off. The Head of State alluded to the fact that, as a result of climate change and the changing landscape of the global fisheries industry, government was encouraged to think outside the box and move to transition to an aquaculture-based operation.

The Agriculture Ministry has commenced sensitization and consultation exercises with the local fisher-folk to reorganize the players and ensure the sector is developed in a sustainable way.
Guyana’s aquaculture sector is being targeted for massive development in both the long term and short term. This year, $293 million was allocated for the development of the Fisheries and Aquaculture sector.