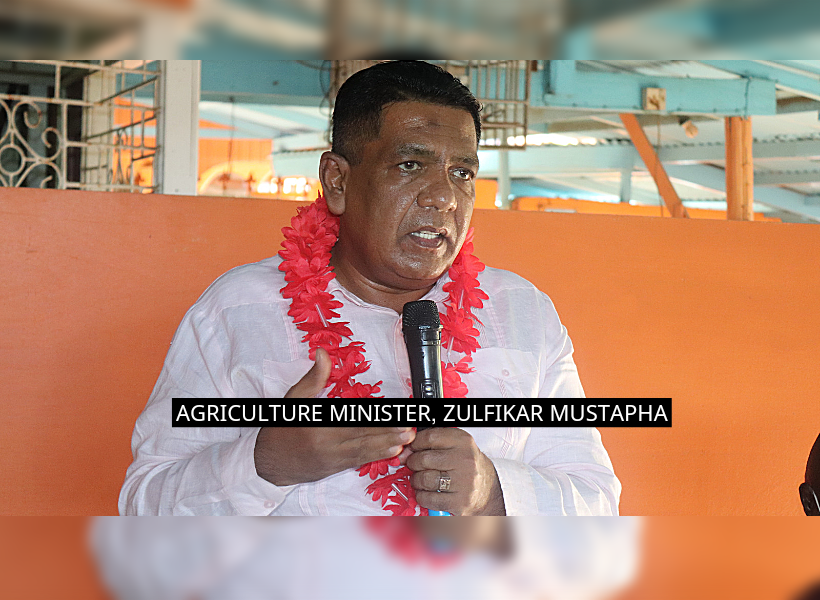 During a recent outreach to the community of Greenfield, East Coast Demerara (ECD), Agriculture Minister, Zulfikar Mustapha told residents that his Ministry through the National Drainage and Irrigation Authority (NDIA) will be carrying out a series of works in the area to ensure residents benefit from better drainage.

These commitments were made after residents appealed for several drains to be desilted. Farmers and residents also told Minister that the koker within the area needed to be cleared while adding that rehabilitation works are needed to be carried out on the roads.

While responding to the issues raised, Minister Mustapha told residents that the government, since assuming office, has been making the necessary investments to develop the sector.

He said, “The President and the Vice President see agriculture as the backbone of this country’s economy so we have to develop agriculture more smartly, especially with the impacts of climate change. This is why this government will continue to make the necessary investments to develop the sector. I also want to commit that we will clean all the drains and canals in the area. Our officers will return in a few days to do an assessment. Once that assessment is done, we will see how best and how soon we can have those works done.”

Minister Mustapha also told farmers that officials from the National Agriculture Research and Extension Institute (NAREI) will be returning to the community later in the week to form a farmers’ group.

Farmers present also told Minister Mustapha that they experienced losses as a result of the recent flooding. In this regard, Minister Mustapha told the farmers that President Irfaan Ali recently announced a multi-billion dollar relief incentive for those who were severely affected.

“Teams from the Ministry were tasked with doing an assessment. Based on that assessment, the President recently announced the $7.6 billion relief package that will be given to the farmers who suffered losses. We are currently vetting the list and disbursement of those funds will commence soon so that farmers can get back to their land,” Minister Mustapha said.

The official also told residents that he will speak with his Ministerial colleague about the roads in the area and encouraged residents who still haven’t taken the COVID-19 vaccine to make every effort to do so.