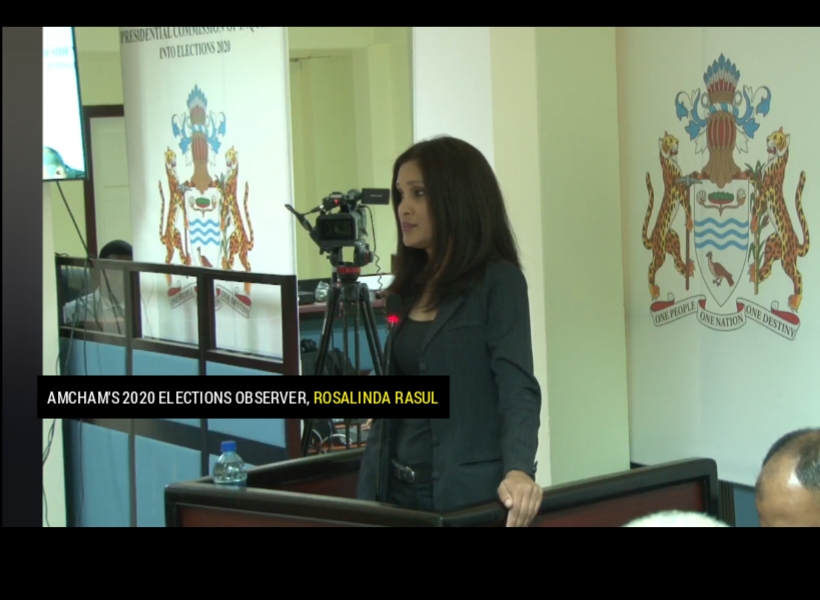 The Commission of Inquiry into the March 2020 General and Regional Elections today reviewed video evidence of what occurred during the tabulation process of District Four.

The evidence provided the commission with a visual analysis of what occured when party agents and observers objected to several anomalies discovered with a number of Statement of Polls.

Returning to the stand was Rosalinda Rasul, who served as an elections observer for the American Chamber of Commerce Guyana (AmCham). Rasul showed the commission, through various videos, that at one point, observers were asked to leave while the Command Center in Ashmins was placed on lockdown.

She testified that the observers and party agents were against the lockdown and questioned the integrity of the security at the Command Center. In the evidence presented, former Deputy Chief Elections Officer Roxanne Myers was seen closing the tabulation room with a key which she kept. This, according to Rasul, was against a previous arrangement made between agents and GECOM.

She told the Commission however that the lockdown occured on the night of March 5, 2020. The day is synonymous for the bomb threat which caused a rokus at the Ashmims building. Despite objections, the building was eventually cleared. But GECOM staff were still in the building according to Rasul.

“We the AMCHAM observers wanted to stay but of course our head was against this stating that it was dangerous and we could not violate that instruction. Because all the other observers had left. And as soon as we left and entered our vehicles that was when the riot squad came in.” Rasul said.

Video evidence was also shown of a meeting hosted by Mingo, with members of Observer missions and party agents. In the video, Mingo was heard explaining to agents that the numbers presented to him were from actual SOPs from all polling places in District Four.

He then suggested a new method of tabulation which from all indications received objections and questions. With an injunction which had been filed on March 12, 2020, preventing the declaration of District Four results, Rasul was then asked by Commissioner Carl Singh about a “declaration of results” allegedly made by the then Returning Officer for District Four Clairmont Mingo.

She noted that the declaration would have been premature, especially since the tabulation process was incomplete. She noted that while all other districts had completed their tabulation, results from District Four was all GECOM needed to declare the election.