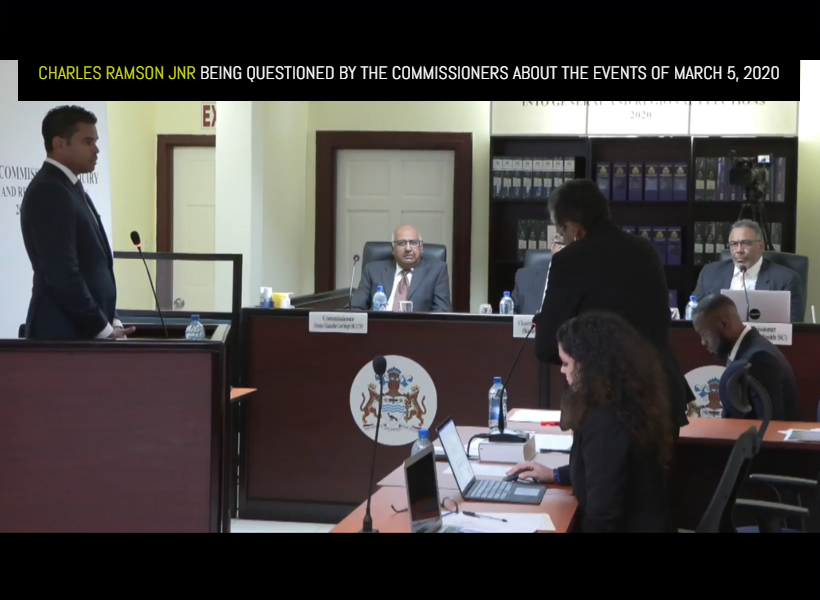 Former Counting Agent for the People’s Progressive Party (PPP), Charles Ramson Jnr took the stand today at the Commission of Inquiry (CoI) into the March 2020 General and Regional Elections.

Ramson testified that on March 5, 2020, District Four Returning Officer, Clairmont Mingo had made a declaration of the district’s results. He told the Commission that he then typed a letter requesting a recount of the results, the declaration was in conflict with data from Statements of Poll (SOPs) in the possession of counting agents.

Shortly after the declaration by Mingo, Ramson said he attempted to serve the request for a recount to Mingo but was blocked by a rank of the Guyana Police Force. He noted that while he identified himself to the officers, he was informed by the ranks that no one was allowed to enter the top flat of the building which housed Mingo’s office.

He recounted that it was an observer from CARICOM who had accompanied him up the stairs after he tried to serve the injunction. He noted that he was on the stairs for about an hour trying to serve Mingo but was unable to do so.

Ramson recalled that Mingo later emerged and was immediately rushed out of the building by police officers. He added that ranks stopped him from approaching Mingo.

“That night, I took a picture with my phone and I sent it via WhatsApp to the Chairwoman (of the Guyana Elections Commission, Justice Claudette Singh), (former GECOM) CEO (Keith Lowenfield) and Mr. Mingo. I also sent a message identifying myself. No one acknowledged or replied at a later time to the letter.” Ramson said he returned on March 6, 2020. He said “…there was a mob in front of Ashmins building.”

Ramson recalled that the mod, outfitted in APNU paraphernalia, displayed threatening behaviour to anyone who appeared to be on the PPP’s side.

Ramson said that the deadline for serving the notice was expiring on the midday of the sixth and he made several attempts to serve the request for recount. Ramson said when he arrived on March 6, 2020, he found the Command Center closed.

“…About 11:53 am we were allowed to serve the letter to the Clerk named Michelle Miller and she accepted it on behalf of GECOM and Mr. Mingo.”