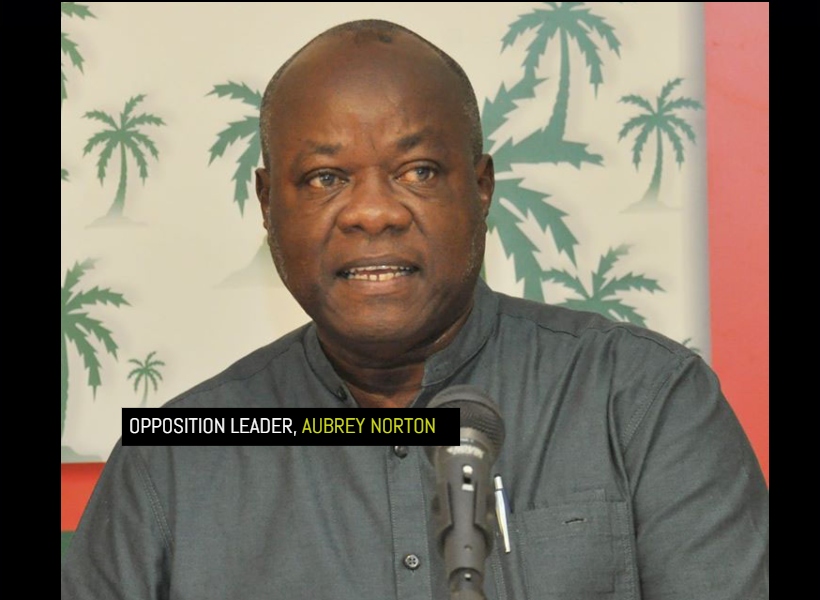 Guyana’s Opposition Leader, Aubrey Norton has warned that communities will soon start to “react” to the government’s pussyfooting in the National Assembly on “urgent” matters of public importance.

“When you raise issues in Parliament as urgent matters…They are not allowed. Even when you put the questions in Parliament, they take a long time before they bring it…And, so, there are a lot of tactics being used by the government to repress the people and repress information. But, on the other hand, what is happening is that it is riling up communities and I am dead sure, that very shortly they will start to react,” the Opposition Leader said during a press conference today.

Norton’s warnings come on the heels of him affixing his signature to a letter addressed to the U.S. Vice-President, Kamala Harris, seeking the Joe Biden’s administration’s involvement in ending alleged anti-Black policies rolled out by the People’s Progressive Party/Civic (PPP/C) government. Norton was among several persons who warned that civil unrest is imminent without external intervention. But, the A Partnership for National Unity + Alliance for Change (APNU+AFC) has been sounding the alarm since 2020 that communities are on the verge of taking to the streets if the government does not acquiesce to the Opposition’s call for the cessation of “discriminatory” practices, and the House Speaker’s refusal to have these issues placed on the front-burner.

The missive was also dispatched against the backdrop of ongoing opposition-organised protests across the nation at various electoral offices, where demonstrators clamour for a refreshed voters’ list, and a shakeup of the country’s electoral machinery – the Guyana Elections Commission (GECOM) – starting with the removal of the Chairwoman, Justice (retired) Claudette Singh.

Also, in a show of defiance against the “undemocratic” Irfaan Ali-led regime, Norton led a House walkout earlier this month, barring Opposition scrutiny of a number of critical government-tabled bills focused on constitutional reform, suicide, bail and restorative justice.

The APNU+AFC said the walkout came as a result of the government’s refusal to discuss critical issues such as the high cost of living; the increase in poverty; the alleged kickback scheme involving the Vice-President, Bharrat Jagdeo; its unwillingness to debate natural gas flaring and the refusal to permit the National Assembly to address the issue of the enactment of constitutional and statutory amendments to facilitate a clean voters list. The coalition opposition also stated on November 7, 2022, that the suspension of eight of its members; the illegal arrest of an attorney for advising her client to remain silent; and the “emasculation” of the Public Account Committee (PAC) also influenced its decision to walk out.