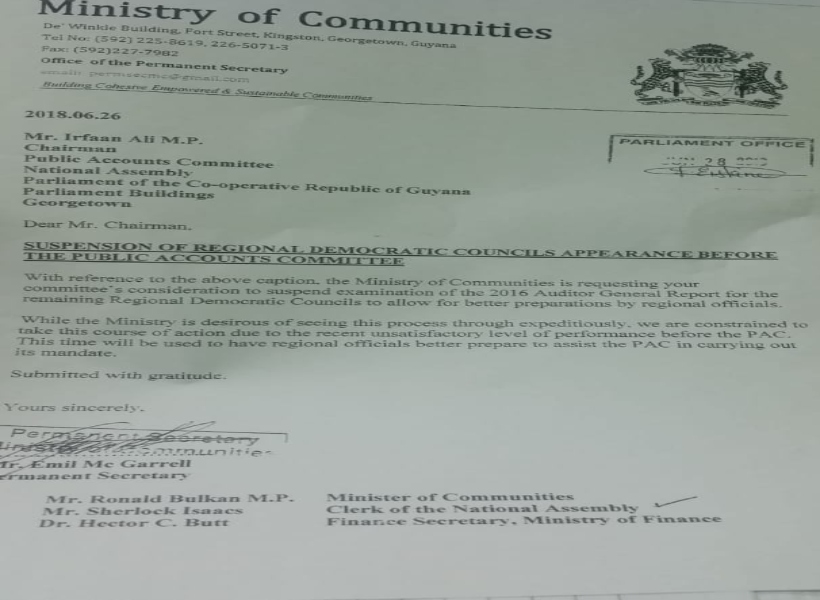 The Ministry of Communities has written to the Public Account Committee (PAC) seeking a suspension of scrutiny into the Auditor General’s 2016 report, noting that regional officers need more time to prepare proper responses.

The letter dated June 26, 2018, was addressed to the Chairman of the Committee and former Housing Minister, Irfaan Ali. The letter was sent from the office of the Ministry’s Permanent Secretary, Emil Mc Garrell.

“The Ministry of Communities is requesting your committee’s consideration to suspend examination of the 2016 Auditor General Report for the remaining Regional Democratic Councils to allows for better preparations by the regional officials.” The letter stated.

The letter states also that while the Ministry is desirous of seeing the process through expeditiously, they are constrained to take this course of action due to the recent unsatisfactory level of performance by its officers before the PAC.

In the meantime, Opposition member Bishop Juan Edghill expressed dissatisfaction with the fact that the work of the PAC is being stymied because of the unpreparedness of the regions’ accounting officers.

In a letter to the media earlier today, the parliamentarian said that he is appalled over the situation where the public officers failed to utilize the existing mechanisms to ensure that they are prepared.

He noted that every regional officer before an appearance before the    PAC has available to them, the services of the Audit Office, the Accountant General and the Financial Secretary to assist with preparations.

“(However) It was disclosed that these services have not be utilized by the officers, thus resulting in them being unprepared for their appearances before the PAC,” the former junior Finance Minister said.

He added that the officers are “seeking shelter” through Permanent Secretary, Mc Garrell from appearing before the committee – the most suitable place where they can be held accountable for their actions.

“It is no secret to the public that some of these officers have been found to have violated the Procurement Act, the Fiscal Management and Accountability Act (FMAA), Stores Regulations and even policies set by the Granger Administration.”

During recent months, Regional Executive Officers (REO) and huge delegations have attended meetings of the PAC to give an account of their stewardship and to answer queries, raised by the Auditor General, in his report for the fiscal year ending 31st December 2016.

“The ineptitude, incompetence accompanied by the twin sins of ignorance and arrogance have been on open display in some of these sessions,” Egdhill said.

He concluded, “This shameful and dismal performance of Public Officers must be dealt with by President Granger and the Ministry of the Presidency because the buck stops at him, they are his representatives.”