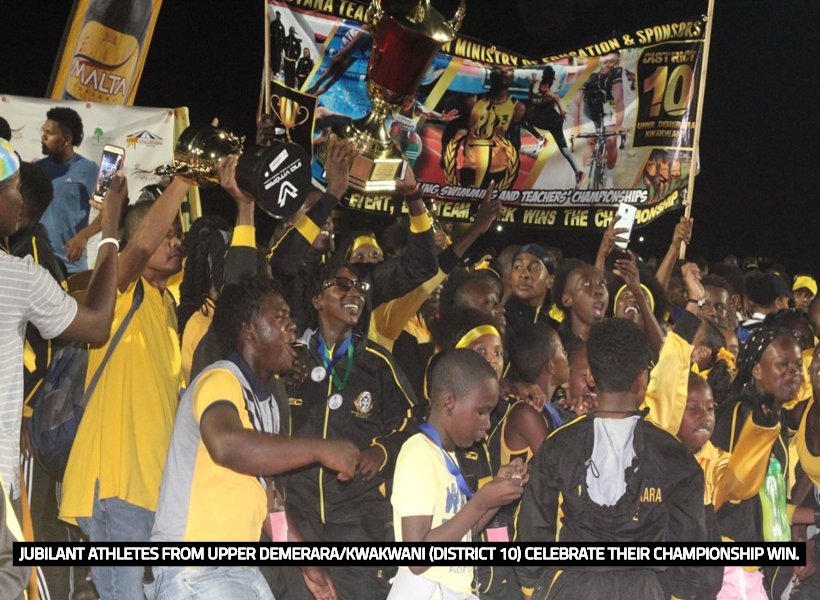 Upper Demerara/Kwakwani (District 10) never looked in danger of failing to defend their National Schools Cycling, Swimming and Track and Field Title over the last week and wrapped up a comprehensive and historic fifth consecutive Championship win yesterday at the National Track and Field Center in Leonora, West Coast Demerara.

This title is the district’s 18th overall, a feat unmatched. District 10, which had finished second on Monday in the swimming and cycling competitions, were their usual dominant self in the track and field events. So dominant were the champions that they beat their nearest challengers North Georgetown (District 11) by a massive 296 points.

Meanwhile North Georgetown, yet again had to settle for second. The side who won the Swimming Championships, ended fifth in the cycling, students’ track and field and the teachers’ T&F competitions for a grand total of 59 points.

In a show of improvement, District Three (West Demerara) ended in third overall this year as opposed to their fourth-place finish last year. The main reason for their improvement was their win in the teachers’ competition. West Demerara also ended seventh in the cycling, ninth in the swimming and sixth in the students’ battle for 52 overall points.

The Championships, better known as ‘Nationals’, is the premier annual event for students and teacher-athletes alike, it was first run off in 1960 and is organized by the Guyana Teachers’ Union in collaboration with the Ministry of Education.