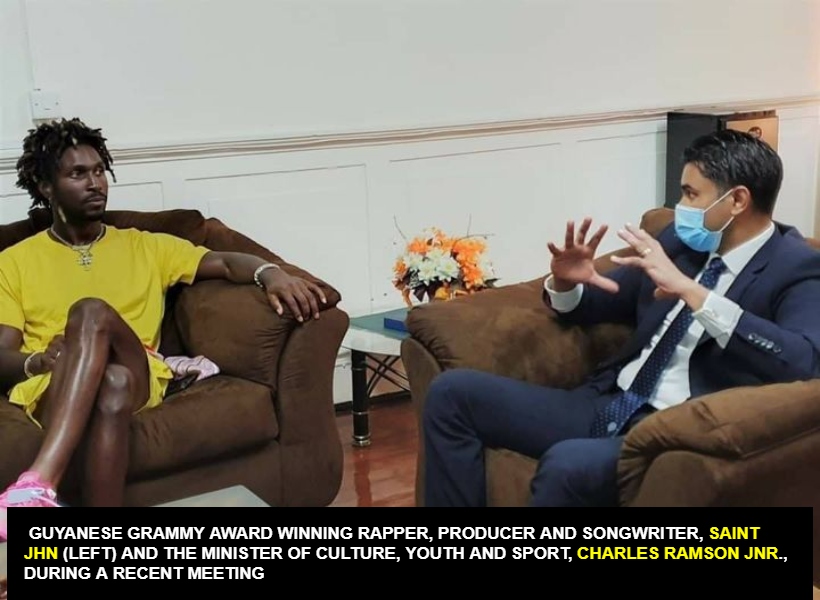 Guyana’s Talent Search Finalists will be getting tips from Guyanese Grammy Award Winning Rapper, Producer and Songwriter, Saint Jhn, as the talent show winds down tomorrow. This was disclosed by the Minister of Culture, Youth and Sport, Charles Ramson Jnr. this morning during an interview on HJ 94.1 Boom FM.

“I’ve just concluded discussions with Saint Jhn. [He] has agreed to do an interview with all of the finalists. I think that will be a huge boost for them because he’s our own, and he’s internationally recognized – Grammy winner, Billboard awards, and a number of international awards. So, the finalists will be able to have a call with him, meet with him – and he’s got such a profound understanding of talent development. He’s a very sharp individual,” the Minister said elatedly.

He noted that the opportunity to benefit from discussions with Saint Jhn is just one of the prizes that the talent finalists will receive. He added that the Ministry’s intention from the beginning of the competition was to not just have one contestant emerge victorious but to motivate all of the finalists to further develop their talent.

“They’re all winners, but there’s no one single prize that is larger than the other – they all get the same…The final is tomorrow, and we want everyone to look, share and give those young talented Guyanese a lot of good energy and love. They worked hard,” he noted.

Carlos St. John Phillips , known professionally as Saint Jhn (stylized as SAINt JHN), is a Guyanese-American rapper, singer, songwriter, and record producer. He released his first album under the Saint Jhn moniker, Collection One, in March 2018. He is best known for his single “Roses”, initially released in 2016. A 2019 remix of “Roses” by Kazakh DJ Imanbek helped the song become a worldwide hit; reaching the top 5 of the US Billboard Hot 100 and topped the charts in Australia, the Netherlands, Ireland, New Zealand, and the United Kingdom. Prior, John wrote songs for a number of acts, including Jidenna, Hoodie Allen, Usher, and Kiesza, among others. Notably, he also copped two awards at the 63rd Annual Grammy.