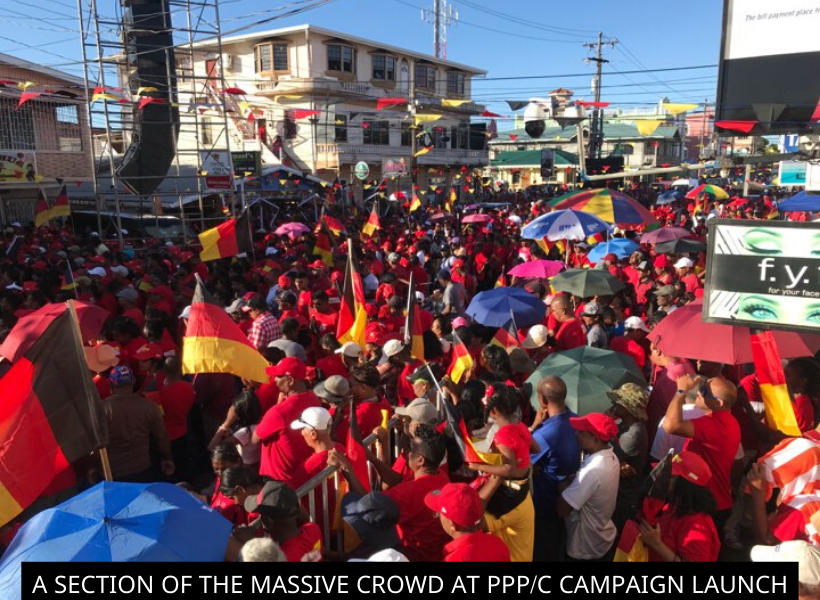 The launch saw speeches from several party leaders as well as new members that are preparing to assume leadership roles. However, the three main speeches were given by PPP’s Prime Ministerial candidate, Mark Phillips, Presidential candidate, Ifraan Ali and General Secretary, Bharrat Jagdeo.

Phillips made his maiden address as a politician. He exuded great confidence that he will serve as Guyana’s next prime minister.

The former Chief of Staff said that he takes good to the PPP/C table. Phillips said that he carries a wealth of experience from the public service in a leadership capacity.
Phillips spoke of the glorious plans PPP has for Guyana and asked that citizens read the manifesto thoroughly. The newbie politician pleaded with supporters to stay focused. He said that it is imperative to focus on important issues and shun idle behavior that would contribute to disunity.

Jagdeo spoke too about the need for unity. He defended the record of PPP and pointed to the many “wrongs” the APNU+AFC Government has committed and made promises as to the methods PPP would take to ensure Guyana is made prosperous.

Jagdeo said that PPP will run a policy-based campaign. Jagdeo condemned the government for the Exxon giveaway. He then said that the PPP is fiercely patriotic and will thus seek to make things better.

Jagdeo told supporters that the PPP was able to transform Guyana even without oil money “imagine, with our managerial style, what will be done with oil money.”

Jagdeo said that PPP is the better choice when compared to the team headed by President David Granger as he has no vision for Guyana. Jagdeo said, “Granger was a failure in the army and he is a failure now.

Ali told his supporters that he does not want to face them with promises but to deliver a plan, one not defined by oil and gas but seeks to strengthen all areas to secure economic growth and the creation of jobs.
Ali said that as a new generation leader he understands and lives the true meaning of transformation.
He vowed to do all that is necessary to allow Guyana to see good transformation, “I will not turn my back on the people.”

Ali then spoke on some of the “transformational projects” that PPP has in store, including the Amaila Falls Hydro Project that will see a significant reduction in the price of electricity.
He said that the PPP team is superior and asked that all of Guyana vote for the PPP/C come March 2.